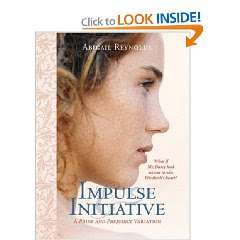 No, this was not one of my 48 Hour Reading Challenge reads, but I did finish this last week in the midst of the big move. I've been mulling it around in my head, so I wanted to get this review down ASAP!

Synopsis: What if? Abigail Reynolds is famous for taking the story of Pride and Prejudice and twisting it just a little. As I mentioned last month, I noticed this book (mainly because of the cover) standing on a display case at the library. I flipped it over and it asked the question, what if Darcy hadn't backed down when Elizabeth turned him down that first time? What if he had pursued her, not taking no for an answer, and followed her to prove that he wasn't what she thought he was? Since many readers know the basic premise of Jane Austen's iconic novel, I'll leave it at that!

Review: Here is my instant response to this version of the Darcy and Elizabeth story. Without the tension, rejection, and humble appeal for Elizabeth's heart, the story just wasn't the same. In this version, Darcy and Bingley return to Netherfield to court the two sisters, and for Darcy to find out Elizabeth's response to his letter following his first offer of marriage. The tension and sparring are no longer there at this point. Instead, we see the classic hero wooing fair maid story, which then loses the appeal we gain of watching Darcy's dejection and selfless service to Elizabeth. The beauty of Darcy serving Elizabeth and her family in the original version is that he does so with nothing more in mind than to see Elizabeth happy, while continuing to think she does not love him. In this newer version, there are no selfless acts, nor reason to believe that Darcy is this romantic ball of mush for this woman (which we all love...that he can be weak at the knees over a woman, but ONLY for her).

While the story itself is an interesting take, and I didn't mind seeing what happened to the relationship (which I didn't think ended up as deep or enduring), it was a little disturbing to see how the physical relationship played out. Now it was not the fact that there is a physical relationship, as much as how it came about in the story. Spoiler Alert*** Darcy and Elizabeth step outside the formal, proper bounds of a courtship and escalate their affections to the point that they have to rush to get married. Why did this bother me? Well, because they spend the rest of the book answering for their indiscretions, and feeling guilty about them. It just wasn't pleasant or romantic to watch Elizabeth and Darcy calming one another after pushing these boundaries...not romantic at all. End of Spoiler.***

In essence, this novel pushed our modern sensibilities onto two, much beloved characters, from an era that would have frowned most heavily on their behaviors. As entertaining as I sometimes find it to read stories that share a take on a story I love, AND although I thought this was a good enough story on some levels, I did think that it limited the romantic relationship of our characters. Darcy ended up being not quite the gallant hero he was in the original, and the couple were moved too far into our modern day in their actions for a story that takes place in the Regency Era.

For more information: Impulse & Initiative: What if Mr. Darcy had set out to win Elizabeth's heart? (Pride & Prejudice Variation)