My time away from my blog has been much too long, so I'm happy to be coming back because of book reviews.  Honestly, there couldn't be a better reason than to discuss a good read.  Today, Megan Mulry has her third in the Unruly Royal series out, so I'm happy to have had a chance to read it and pass it along! 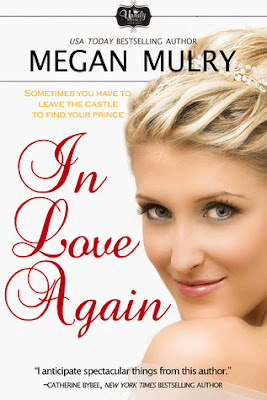 Synopsis:  From Goodreads, "SECOND CHANCE...
The Marchioness of Wick is about to get a second chance at life...whether she wants it or not. After twenty years in a loveless marriage to a duplicitous British aristocrat, Claire Heyworth Barnes finds herself broke and alone. Encouraged by her dynamic American sisters-in-law, the shy royal decides to start over in New York City. When she lands a job with a famous interior designer, Claire accidentally reconnects with the first—and only—man she ever loved.

FIRST LOVE...
Benjamin Hayek has never forgiven Claire for the heartless way she left him when they were teenagers in the south of France. And even if he could, Claire's not sure she has the courage to contend with how he makes her feel. Can they build a new love from an old flame? Or will a bitter history and a complicated future stand in their way?"

Review:  Megan Mulry has a knack for writing a variety of female characters, which I know from reading her first two novels in the Unruly Royal series, A Royal Pain and If the Shoe Fits.  Each of the characters she has written have their own distinct direction they are going in life, with their own basket of issues and flaws, which is why we want to read these characters in the first place!  I really appreciated the distinct departure that Mulry then took in this third installment with Claire, who we had a glimpse of in the second book.  Claire is in her late 30's and going through a rather messy and painful divorce.  She has been left in shambles, but has been taught by her culture to have a stiff upper lip and never show her emotions.  This only leaves her isolating herself and shoving anyone who wants to help her, completely out of her life.  For those who have read book two, the instinct is to not like Claire, but we quickly learn that maybe Claire has been emotionally abused and left "hung out to dry" emotionally speaking?

Into this equation comes Benjamin, one of the most dreamy (and I don't use that term often) characters I've read in quite awhile.  Yes.  I really liked Benjamin.  Maybe I'm just stressed out from work right now and found him to be such a solid, stand up character that he struck a chord with me on a personal level, but this really was a solidly great guy.  Yes, ironically he was from Claire's past.  Would we have it any other way?  But, he was someone who Claire had to try to learn to let her guard down around.  I also felt that he was such a solidly good guy, that it made it difficult for her stuffy character (from what we see on the outside) to find any excuses to get rid of him.  There wasn't much this guy did wrong, and it was okay in this case.

This really was a great character story that happened to be a romance. I like it when that happens. You know that the story is supposed to be romantic, but you felt that it was solidly about character development --which is most important anyway, right?  (Speaking of which...for my sensitive readers--because I know you're out there--it is a romance, so there are some sexy times.  There's your disclaimer.  I don't want you saying I didn't warn you!)  The story was more about two people whose lives had changed dramatically and were about to again, and we were along for the ride!  Overall, I thought it was an enjoyable read, and I liked the twist to look from the "royal" perspective rather than the commoner this time around.  This is a series I will continue to follow down the road.

In Love Again is out today.  You can check out her other books and about the author at Megan Mulry's webpage and her Facebook page.  You can also check her out on Twitter @MeganMulry
Posted by Becky at 11/29/2013 12:35:00 PM 2 comments: Links to this post