Review: From Dead to Worse by Charlaine Harris

I'm pretty hard pressed to remember where I'm at in this series half the time.  If I didn't keep a book log as well as this blog, I'd be lost!  Since I'm up to my eyebrows in grading right now, and just have a lot on my mind, the Sookie Stackhouse series has been a strange little escape from it all.  I recently finished reading From Dead to Worse and am still struggling to figure out what Harris was doing with this book.  This was a good book, but maybe a bit more of a transitional book than forwarding the story much?  I'm still not sure. 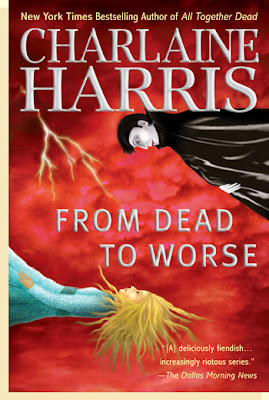 Synopsis:  Since I struggle a bit to identify this book, forgive me as I rely on Goodreads for a tidy summary:

"The supernatural community in Bon Temps, Louisiana, is reeling from two hard blows - the natural disaster of Hurricane Katrina and the man-made horror of the explosion at the vampire summit the month before in the up-north city of Rhodes. Sookie Stackhouse is safe but dazed, yearning for things to get back to normal. But that's just not happening. Too many vampires - some friends, some not - were killed or injured, and her weretiger boyfriend, Quinn, is among the missing.

It's clear that things are changing, whether the Weres and vamps of her corner of Louisiana like it or not. And Sookie - friend of the pack and blood-bonded to Eric Northman, the leader of the local vampire community - is caught up in the changes.

In the ensuing battles, Sookie faces danger, death... and, once more, betrayal by someone she loves. And when the fur has finished flying and the cold blood flowing, her world will be forever altered."

Review:  I really liked this eighth installment in the Sookie Stackhouse series, as it seemed to get back to Sookie living her life in Bon Temps.  I sometimes find myself frustrated when Sookie becomes the target of a bunch of bad guys that she then needs protecting from.  That's not to say there wasn't some of that in this book, and maybe I'm just growing immune to the lighter variety threats, but these felt less dangerous than some of the previous snares Sookie has been involved in.  Thankfully, Quinn is out of the picture.  Yes, I think he was a nice, protective diversion for Sookie, but I wasn't a huge fan and felt that he might be pretty short-lived as a romantic interest.  Obviously, with a stronger connection to Eric that has been established over the course of the previous seven books, we know that he will probably be popping up a bit more.  I can't say that will be a disappointment!

Although there is a shifting of power going on in book eight, and there is a new king that Eric has to pander to, this book felt more about regrouping.  With the big catastrophe in Rhodes, from the previous book, that left the paranormal community rocking (and many dead), and also the devastation of Hurricane Katrina in New Orleans, this book seemed more about seeing where all our characters were at and how they were doing.  To me, this seemed like a slower-paced storyline that helped the reader retrace everything.  I enjoyed this regrouping and appreciate the continued strength that Sookie goes on to show.  Also, Sookie draws closer to family in this book, which adds an interesting twist to the story that had me reaching for book nine pretty quickly!

If you haven't read this series, or started it and felt frustrated, I say continue on.  Looking back, I struggled through books two through four.  Once I got past that initial slump, I've been eager to find out what would happen in each book since!


As I mentioned in my review, I felt this book was a bit of a bridge.  Do you ever feel that there are books in a series that are there to bridge to a new twist in the story rather than to really add or continue what was started?  Are these books necessary, or at least necessary to that degree?
Posted by Becky at 10/18/2010 06:09:00 AM