Review: A World Without Heroes by Brandon Mull 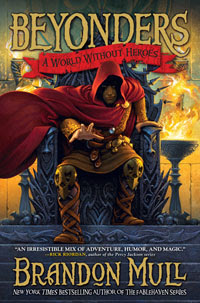 Synopsis:  From Goodreads, "Jason Walker has often wished his life could be a bit less predictable--until a routine day at the zoo ends with Jason suddenly transporting from the hippo tank to a place unlike anything he's ever seen. In the past, the people of Lyrian welcomed visitors from the Beyond, but attitudes have changed since the wizard emperor Maldor rose to power. The brave resistors who opposed the emperor have been bought off or broken, leaving a realm where fear and suspicion prevail.

In his search for a way home, Jason meets Rachel, who was also mysteriously drawn to Lyrian from our world. With the help of a few scattered rebels, Jason and Rachel become entangled in a quest to piece together the word of power that can destroy the emperor, and learn that their best hope to find a way home will be to save this world without heroes."

Review:  A quest doesn't begin to describe the journey that goes on in this book.  This is definitely a story that takes you through  the ringer.  Jason is just this kid, who is bizarrely transported to this new world where suspicion and fear reign.  To some degree I was taken off guard by the level of danger and fear that this young boy had to face.  Okay, so there are some big name heroes who faced big, scary challenges in a story, but that's hard to remember when you're watching this boy hide away from some evil characters.

There is a lot of adventure built into this first book in the Beyonders series.  I liked the idea of Jason and his friend Rachel searching out a mysterious word, piece by piece throughout the story.  I'm a word person, so of course I loved that concept.  Some of what happens over the course of the book takes it all to another level with this evil wizard Maldor, who scares everyone into complying with his rule.

I'll be honest.  I got lost in the story.  I'm not always good with fantasy stories where I have to think about what something might look like or even what's going on.  Had I read it straight through in one sitting, I might have followed Jason's adventure better.  There was just so much going on, that I often had to try to get the context and keep plowing ahead.  I've finally figured out that it's just me though.  All that action is really appealing to the teens that I teach, so I think it's evidence of my own inability to imagine!  Yes.  I'm admitting that one.  There is a lot going on in this story, with more to come.  If you are looking for a journey-tale that is packed full of action, mystery, and adventure, then this story fits the bill.  Brandon Mull is a really good writer, so I think that with the right catch, you can dive in and enjoy.

*FTC Disclosure:  This review is based on a personal copy of the novel.