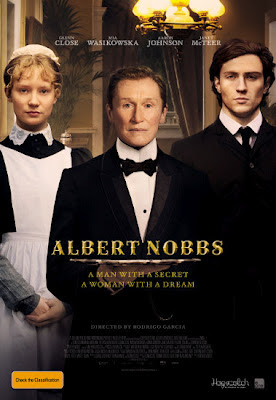 Albert Nobbs is based on a short story by Irish novelist George Moore.  In the story, Albert is actually a woman who has chosen to pose as a man.  As such, Albert opens the film by working as a hotel waiter, which he has done for almost his entire life at Morrison's hotel.  With the passage of time, Albert obviously wishes for a different life, one where he can own his own business and have his own family.

From this we get a complicated story that was quietly played out over the course of the film.  We watch as Albert tries to figure out how to make his dreams come, and we are left wondering why and how Albert could play out this charade for so long.

In a strange Upstairs, Downstairs meets an Irish Downton Abbey, Albert Nobbs takes the viewer through a complex set of issues that really boil down to the desperation of lives lived in silence and hiding.  This was a film that made you question a lot of things, but answer very few of them.  Some of the ways the film sets up the story lead us to believe, quite early on, that perhaps Albert isn't a woman desperate to care for herself in a man's world, but is actually a person confused about their gender and identity.  With that in mind, the film gets more and more complex.  And maybe it shouldn't, but it does.  In the end, it feels as though Albert should just be able to find peace and truth somewhere.

Personally, I really appreciated the thought that went into this film.  This is a "thinking man's film," as I like to call them, which means that it tackles some gritty, complex issues.  In my opinion, the subtly in Albert that others found creepy, was not creepy, but more unsure.  Albert was a character that was so simple in his desire for love and acceptance, yet so fearful of it, that I couldn't help but feel sympathy for him.  He really chooses to spend a life letting no one in.

In short, if you're not into art house style films, this might not be a good fit for you.  For me, it was an interesting and thought-provoking film that tugged at the proverbial heartstrings.
Posted by Becky at 5/18/2012 09:02:00 PM