I think I've entered the phase known as "catch up" time where it comes to reviews.  Thanks to our recent readathon and a bit of a reading jag from being sick so much, I really have read quite a bit and pulled ahead in my Goodreads challenge for myself.  Finally!  As part of this catch up, I needed to get my review posted for Elana Johnson's novel Possession. 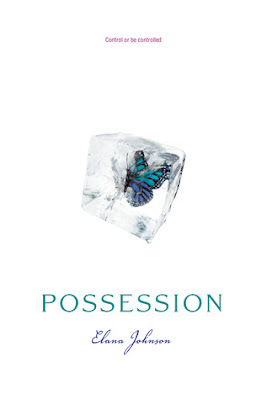 Synopsis:  From Goodreads, "Vi knows the Rule: Girls don't walk with boys, and they never even think about kissing them. But no one makes Vi want to break the Rules more than Zenn...and since the Thinkers have chosen him as Vi's future match, how much trouble can one kiss cause? The Thinkers may have brainwashed the rest of the population, but Vi is determined to think for herself.

But the Thinkers are unusually persuasive, and they're set on convincing Vi to become one of them...starting by brainwashing Zenn. Vi can't leave Zenn in the Thinkers' hands, but she's wary of joining the rebellion, especially since that means teaming up with Jag. Jag is egotistical, charismatic, and dangerous--everything Zenn's not. Vi can't quite trust Jag and can't quite resist him, but she also can't give up on Zenn.

This is a game of control or be controlled. And Vi has no choice but to play."

Review:  Admittedly I try to give books an honest approach where I find positives and negatives, but I think I just wasn't the right audience for this dystopian, futuristic young adult novel.  Vi is a girl that is both supposed to be strong and vulnerable, to maker her a well-rounded character.  She is strong in the sense that she goes against mindless control of her society and those around her, yet on the flip side, she is pretty driven by teenage angst.  Most of that angst is centered around Zenn and Jag, the two boys who make her head spin and her heart flutter.  On both counts, I struggled a bit.  I didn't always get it and wondered what I was missing.

There is a lot of story going on in Possession that I think teen readers might really like.  I'm not sure that I was the right audience though, especially when it came to the teen romance, which I'm usually fine with.  In this case, some of the interactions between the characters felt creepy and like the couple that you see all over one another and wonder if they even really like one another or are just going with what's available.  It just all felt off to me, with all the constant touching and romantic lingo.

Beyond my own adult response (which isn't normally so jaded-sounding), I do think there is a lot of great action and suspense to grab readers.  Some of the action is thrown at us a bit quickly, without explaining it all, but if you enjoy dystopian novels and understand these story lines, this really might fit the bill.  Follow up novels are out and hopefully answer the cliffhanger that this book ended on.