School is out!  Believe it or not, I'm so busy that I've hardly had time to notice.  Between meetings, errands, and preparations for a presentation I'm part of next week and the start of summer school, I've been plowing forward.  Most of it has been exciting though, so I can't complain.  I already have plans for next school year, so I know I'm switching gears in a good way.  It was  good year.  Now I'm eager to get some rest after this next week!  Bring on the summer!

Did I mention that I have some amazing plants going outside in my own urban garden?  Love.  I can't wait to see how they do this year, especially since I managed to get everything in a month earlier than last year.  I'll have to post some pics soon.

As for reading, I'm terribly behind, but I now have more time for reading AND reviews!  For instance, here's one I read during the readathon, and I'm still thinking about it.  After reading and loving Blankets, how could I ever pass up Craig Thompson's newest graphic novel Habibi? 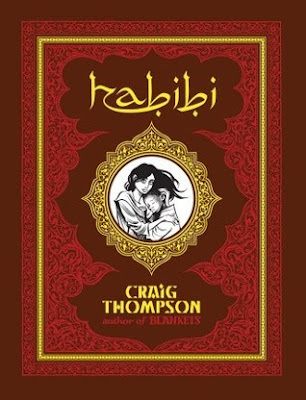 Synopsis:  From Goodreads, "Sprawling across an epic landscape of deserts, harems, and modern industrial clutter, Habibi tells the tale of Dodola and Zam, refugee child slaves bound to each other by chance, by circumstance, and by the love that grows between them. We follow them as their lives unfold together and apart; as they struggle to make a place for themselves in a world (not unlike our own) fueled by fear, lust, and greed; and as they discover the extraordinary depth—and frailty—of their connection.

At once contemporary and timeless, Habibi gives us a love story of astounding resonance: a parable about our relationship to the natural world, the cultural divide between the first and third worlds, the common heritage of Christianity and Islam, and, most potently, the magic of storytelling."

Review:   Habibi is a hard one for me to review.  I loved it, but know that it's not an easy topic or direction for many readers to take.  I love the way Thompson takes on challenging emotions and topics head on, making his characters painfully human and vulnerable.  This one was no exception.  Dodola learns early that to be a girl is a dangerous and powerful thing all in one.  Taken advantage of for her sexuality, we see a wounded character who tries to survive in a world that seems to only want her for what she can provide men physically.  Despite this, she tries to move forward in her life and to protect the little slave child Zam, who comes into her life like a child she never knew she wanted or needed.  Together, they try to piece out happiness.

There is a lot of tragedy and and edgy harshness that I didn't expect.  In that, it was haunting and and made its characters more beautifully flawed and intriguing than before.  I really felt pulled in by Habibi and have long considered its characters and themes.  Let me not kid anyone though.  This is a gritty story about two harshly treated characters.  If you're game, I highly recommend it.  The pictures were beautiful and really propelled the story.  For me, it was a story that made me think and feel, which I love.