After being away for the weekend, I wondered how my little urban garden was doing.  It was okay.  The lavender died, but the cherry tomato plant has produced four tomatoes, my basil plant has produced enough for one batch of pesto, and my lettuce is probably a week away from a harvest of a couple of salads.  I'm not sure I'll recoup what I put into them, but it's in the trying, right?

Along the lines of that little urban garden, I recently read Just Food by James E. McWilliams, which is an interesting look at food movements and their real impact on the globe. 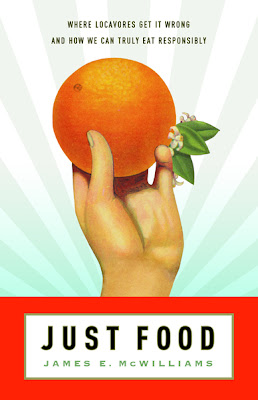 Synopsis:  The basic premise of Just Food is that the eat local and organic movement is not the answer to our world's problems.  Although it has been touted as the way to save the environment, it is actually going to create a problem in production, which will lead to starvation and a severe lack of goods.  McWilliams also looks at safe ways of using modern technologies and chemicals for increased production with a smaller carbon footprint.  In short, what are some options for producing safe food for consumption, that will feed the world, and not destroy the environment for the future.

Review:  Just Food is not for the faint of heart or causal reader.  James E. McWilliams has written a strong argument about the misleading ideals being spread about the "locavore" movement and how it is causing consumers to vilify methods of production that could reduce costs and still save the environment.  The book is heavy handed in its use of facts, data, and research, which gives it good backing, but makes for weighty reading.

McWilliams really has seven key arguments that he makes in the book:

Each of his arguments make real sense when backed with such strong research and evidence.  Although the reading was a bit tough for a casual reader, with some general interest as I had, it is a great book for putting the "locavore" movement into perspective.  In short, I thought that McWilliams felt like the moderate voice in the argument.  Sometimes I feel like I have to become a radical in my diet and the way I live to really make a statement, and that can just be too big of a commitment.  This book, however, explains why a more moderate approach to food and where it comes from might actually be saving us.

In a lot of ways, I still feel pretty helpless in any sort of global change.  So here's my take away.  This book is trying to solve a pretty big problem, on a grand scale, not just what I put on my table.  Although he doesn't even really touch on health issues, what he says makes a lot of sense.  He's not trying to tell us not to eat what we like, but he does show the value of eating more vegetables, fruits, and farm-raised fish.  When we see how we used to eat, even fifty years ago, it just makes sense that we need to shift back to whole foods and less meat.  If we could just shift to a healthier way of eating, the demand on markets would also change, so I suppose that being a smarter consumer could make a difference.  That's the idea, right?