The W's of Reading: Camping Memories 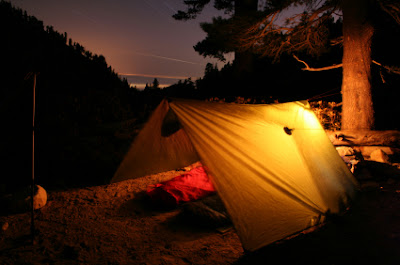 After finishing Wolves, Boys, and Other Things That Might Kill Me, I have to admit that I had a flood of memories come to me from my childhood growing up in rural Idaho.  So, the novel really didn't talk about camping at all, but I grew up near where the novel was set, so I've been reminiscing a lot lately.  Once again, there's another reason to love reading; I get back all those fun memories that I'd filed away somewhere!

Some of the memories I couldn't stop thinking about this week have to do with camping trips.  Although camping and nature outings were very much a part of my summer breaks, my family actually wasn't a big "camping" family.  I usually went with a church group, a friend, or we just pitched the tent on my grandma's lawn and called that camping!  (Believe me when I say that camping on the lawn was the best, because it was nice and cool, and you could be as noisy as you wanted.)

One aspect of camping that especially makes me laugh now, but TERRORIZED me when I was in my early teens were pranks.  At our church group's campground in the mountains, there was an old mine entrance in the hill above the camp.  As first years (meaning you were new to camp & usually only 12 or 13), the older girls told us this drawn out story about how it was haunted and such, later taking us up there at night to scare the living daylights out of us!  When we went camping, it never failed that someone would warn us about bears, cougars, or mountain lions.  Of course that only made it an impossibly scary thing to get up in the night to walk to wherever the bathroom was located, which was usually as far away as was humanly possible.  If you survived the heart palpitations from running there and back, then you took another hour to slow your heart down enough to actually fall asleep.  Now I remember why we always came home from camping trips so stinking tired.

It wasn't until I was in on the jokes and pranks that I actually thought they were funny, but until that point, it's no wonder that camping caused me to shudder (from something other than the bugs)!  I have to say that it's thanks to a good book, accessing my own prior knowledge to put me on the path to memory lane.  The book had nothing to do with camping and other summertime shenanigans, but since I grew up in that area, it sure brought back some fun memories!

In dedication to my own prank memories, I had to include this Scare Tactics prank.  When I'm having a grouchy day, I swear that this video can yank me out of it with a good laugh!  Enjoy, and happy summer!

Email ThisBlogThis!Share to TwitterShare to FacebookShare to Pinterest
Labels: discussion