This week has seemed like a month!  Since I have never been around "home" here for my summer break, in years (literally), I'm finding that there are a lot of things I'm trying to take care of so that I won't have to worry once the school year begins.  When I'm away from home, I'm forced to relax and let it go.  Maybe that's a good reason to get out of Dodge! Where did those lazy days of summer go that we used to have as little kids? 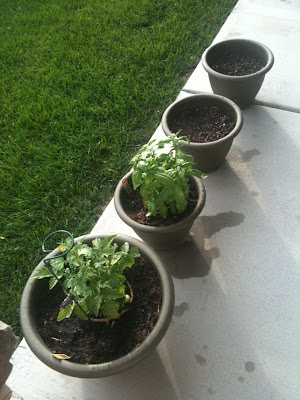 One nice thing about being around home is that I was able to plant a little urban garden that I put on my back patio.  Growing up in Idaho. we had a huge garden, so I've always kind of missed having plants to tend over the summer.  Now I have a few of my own with a cherry tomato plant, a basil plant, and a couple pots that have lettuce.  I didn't get to put these up until the first of July, after I got home from my trip, so I think they are doing pretty good (the lettuce was just last week & I see little plants popping up). I also planted a couple lavender plants, just as a reminder of France.  They're looking pretty gnarly though, so I'm not sure if they're going to make it?  I had to buy the lavender though, because as we drove from Calais to Paris, I noticed these small fields of lavender and had to recreate a small piece of it on my back patio.  I love it.  Now I have to hope that the tomatoes and lettuce pull through or I'll be at the farmer's market more than I originally planned! 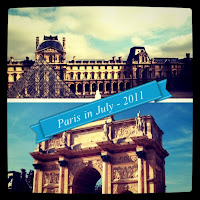 This week, although I had meetings to attend and a general list of things to do at home, I listened to some of the French music I brought home for my Paris in July Challenge.  My main focus was Edith Piaf, who I have to say was like a vacation to Europe for my ears.  If I didn't want to spend my life traveling the world before, her music really set me in that direction!  Many of us are already familiar with "La Vie en Rose", and in fact, I had even seen the movie about her life with the same title.  (Here is a link to Edith singing "La Vie en Rose" which I can't embed, but wanted to share because it's my favorite.  Also, here is a beautiful translation of the lyrics.)

Edith was famously abandoned by her mother and alcoholic father and went to live with her paternal grandmother who ran a brothel in Paris.  Edith was later discovered when she was singing on the streets, and upon beginning her career, would tremble before taking the stage.  This earned her the title "The Little Sparrow" which followed her throughout her career and life.  Spanning the time before and after WWII, Edith is still considered one of the most famous artists of France.  In fact, on that drive from Calais to Paris that I mentioned above, we listened to the "Best of Edith Piaf" over the bus intercom.

Although I don't speak any French, I have to say that the music really does transcend language barriers.  I may not know what Edith is singing, but I can feel it.  One song that I really like is "Non, Je Ne Regrette Rien" which I translated and means "No, I Do Not Regret".  It has a fantastic musicality to it that makes it feel like a real anthem to survival.

I still have more French music to explore, but what better way to begin than with Edith Piaf?  I've really enjoyed listening to her CDs this past week and plan on downloading her music so I can keep a copy.

*The Paris in July Challenge is being hosted at Bookbath and Thyme for Tea.  Stop by to join in today or to check out other great posts.