In general, I love art house films, independent movies, and foreign films.  In fact, I think I've seen my fair share and really love the thought that goes into them.  I will admit that I've often struggled with French films and even had a conversation about it with a historian/guide on my trip last month to Paris.  After a pretty lengthy conversation about what the French find important or enjoy exploring, I learned that they like to consider existential questions about the true nature of man, his relationships with others, and his relationships with larger "truths" around him.   Honestly, I'll have to give some of these contemporary French films another chance. 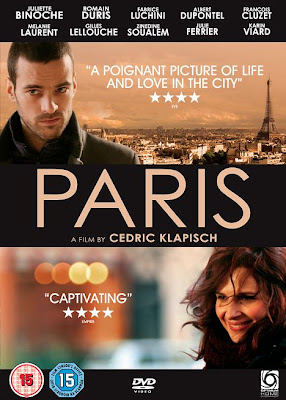 One film that set me on that road was the movie Paris, starring Juliette Binoche and Romain Duris.  The basic premise of the film is centered on the life-threatening illness of Binoche's brother, played by Duris.  From this story, we see a number of other human stories play out around them.  We see the story of the couple who work in the market, who have separated.  We see the professor, who is undergoing a bit of a mid-life crisis.  We see the girl across the street, who seems so carefree and happy, but who can't settle on one thing.  And so the stories go on and on and on, each connecting back in some way to the brother and sister.  Through the stories, the city of Paris itself plays an integral role through its beauty, culture, and history.

Although a bit drab, with the hard issues and crazy relationships, I thought it was really beautiful.  Maybe having gone through caring for a family member who was terminally ill made the solemn, soul searching in the movie more palatable, but I thought the relationship complex and intriguing.  I wouldn't say that the entire movie is drab, and in fact would say that it really draws on the small beauties of life. 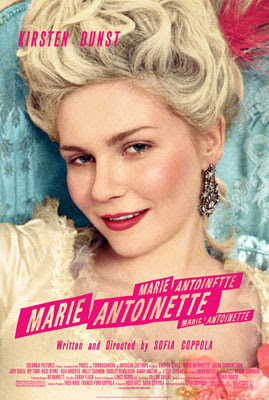 The second film I actually rewatched was Marie Antoinette with Kristen Dunst.  How could I not come home from Paris and watch this film again?  I wanted to see more of Versailles (minus the zillions of tourists) and see a dramatization of that amazing palace with someone living there!  I'll admit that the first time I saw the movie in the theater, years ago, that it was zany and felt like a Rocky Horror film mock up of what it must have been like.  Now, having read a bit and visited Versailles, I kind of get what they were going for in the film and totally loved it!  I suppose it also helped that Laduree, where I picked up my own box of macaroons, supplied the cookies and the color palate for their movie version of Marie Antoinette's life. 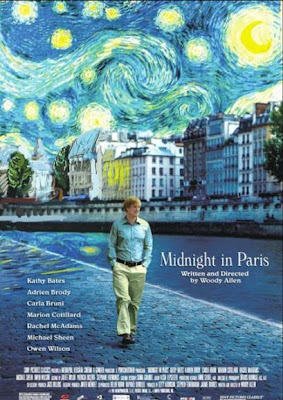 Finally, I went to see Midnight in Paris, starring Own Wilson and Rachel McAdams.  The basic premise of the film is that Wilson plays a film script writer from Los Angeles who is vacationing in Paris with his fiance, played by McAdams.  In the quirky style that is a Woody Allen film, there is a lot going on in the dialogue and conversations that you have to pay careful attention to.  Basically, Wilson loves Paris and reminisces about the 1920's and how much inspiration he could have gotten there as a novel writer, had he lived at that time.  From this one little wish, the story takes off and he has quite a crazy experience with many of the authors, artists, musicians, and intellectuals of that period.  How would you explain such inspiration and the need for more with the people around you?

I really loved this film and thought it was too short!  There is a lot of name dropping and one liners and quotes that I had to pay very close attention to catch.  I quickly found myself scouring my memory for every discussion I'd sat through in my Humanities classes back in college and thankful for every biography of an artist or author that I've read.  I still know that I missed a few and have a few others that I want to look up more information on their lives.  On the whole, this was such a fun movie, with quirky dialogue and snappy wit.  If you love art and culture, reading and philosophy, then this movie is just your cup of tea.  The real relationship in the movie seemed to be between the artist and his creative muse, but the overriding message of the movie is the best of all (which I'll leave to you to discover because it would give too much away).  Paris is a wonderful center for the film, and definitely steps in as one of the main characters in the film.  Without it, you wouldn't have all the other crazy characters.  This was a fun, thinking man's film, and one that made me yearn for more like it!

Thank you SO much to everyone who left me recommendations for other great French films, or films that center around Paris.  I have a long list to try out!