I think I can say that I've snapped out of the moody blues that had taken over me on Monday.  As with life, you just deal with people moving on and things always changing.  This weekend I'll be seeing a lot more family and friends at my cousin's wedding, so I will get a lot of time with people I love!  That is definitely something to look forward to.

Anyway, as I mentioned on Monday, I have been in a bit of a dry spell with reading.  That changed when I ended up not sleeping Monday night.  Yep, I literally didn't sleep one bit, so I just stayed in bed and grabbed a couple of books.  One of them that finally sucked me in was Dilemma by Father Robert Cutie.  In our local library, they put out new books, by category or genre on display as you walk in.  I always like to look over the new arrivals and noticed Dilemma there.  Because I remembered this story from the news and his appearance on Oprah, I was interested to read his take on it all and to catch up with where he is now.  So, rather than my typical synopsis and review, I wanted to just dive into a review to tell you more about his story. 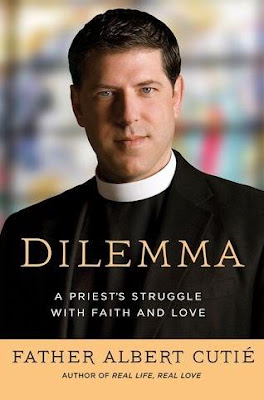 Father Robert Cutie was born in Puerto Rico and then raised in Miami, Florida.  His parents were Cuban and had left Cuba back in the 60's for Puerto Rico, but finally ended up in the United States.  Robert grew up Roman Catholic and felt a strong connection to the church, so after graduation at the age of 19 he entered the seminary to study to become a priest.  He later took his vows and served as a priest in Florida at a variety of parishes and churches.  Later in his career, he was asked to join a daily talk show on Telemundo (a Spanish-language network), where he gained notoriety for his moderate views.  He later went on to work on his own talk show on the EWTN (an international Catholic network).  During this time, he was also doing the day to day labors of a Roman Catholic priest, serving the people of Miami, Florida.

His career as a Roman Catholic priest was one part of his life, but the book is really a more interesting internal look at Cutie's interpretation and view of what was going on in the church and in his own life.  Because he later met a young woman in one of the churches he served in, felt what he says was a powerful "love at first sight" experience with her, and later followed his heart to acknowledge his love for her and to eventually leave the priesthood to marry her, his story is a type of "how did this happen" retelling.  Cutie shares the struggles that priests encounter in being celibate and denying their natural sexual urges.  He doesn't ever share his own or what that was like for him (which I found strange), but he does talk about the varied sexual practices going on behind the scenes in the priesthood.  From his own experience, he knew of sexual affairs going on in the seminaries between the teachers and seminary students, priests who had girlfriends/boyfriends that they either housed with them or off church property, fathers who had children by a variety of women, and even priests in the upper levels of the Vatican who where famously homosexual with partners there.

Although you might think the story is about his "dilemma" to leave the church for the woman he loved, the book is set up much more to examine the practice of celibacy.  From the beginning of his story, to the last several chapters that are more of a persuasive essay on the negative side of celibacy, his book seems to be more of an argument against celibacy and more about the acceptance of married priests and an acknowledgement of sexuality as a part of mankind.  As such, and with this thesis, the book comes together with a pretty powerful message that man's sexual nature cannot just be demonized and then skirted around or ignored, but must be addressed and encouraged in positive ways.  In fact, Cutie has strong empathy for priests who have been demonized or cast aside because of  scandals that have reflected badly on the church.  One of his main issues with priesthood, as he currently see it, is that those who remain to secretly carry on sexual affairs and such are more successful in the priesthood than those who choose to share their struggles and desires and want to get help.  This has then encouraged a culture of secrecy that reaches the highest levels of the church and continues to create an atmosphere where men joining the priesthood continues to plummet.

I remember seeing Father Cutie and his now wife in the pictures that broke in the news across the country, and even his later interview on the Oprah Show.  Yes, it was big news that this famous Roman Catholic priest was caught canoodling on a beach in Miami, and I remember thinking that he was incredibly naive to think he could go out on a beach somewhere with a woman and NOT get caught!  In the book, he describes what led up to this and how he had already admitted in his own confessions to another priest his feelings for his now wife.  At this point, his disillusionment with the priesthood, the issue of celibacy, and the entire sexual scandal that continued to hang over all priests in the church was a bigger issue than even his decision to leave the priesthood to get married.  His decision was not between the woman he loved and the priesthood, it was between his faith and his priesthood.  In essence, had he not been caught, he could have continued a secret relationship with her and never admitted to any of it.  However, because of his own determination to leave the Catholic church, he left and joined the Episcopal church, where he is currently serving as a married priest (who was also expecting a baby girl with his wife at the time the book was written).

As I'm not Catholic, I have to say that I was unfamiliar with priests and what they have to do to join the priesthood.  Fr. Cutie's explanation of the priesthood and the troubles it encounters were extremely enlightening, especially considering the horrific spread and cover up of sexual abuse that has been uncovered across the country.  Cutie shares at a later section of the book that studies within the priesthood show that over half of all priests are homosexual, leading to a serious question about the forced cover up that is actually encouraging men who want to be faithful Catholics to choose priesthood and celibacy as a way of avoiding that lifestyle.  The church has recognized this to be a real challenge, and although homosexuality is not a precursor to becoming a pedophile, it has pushed all sexuality into the closet (so to say) and caused some priests to express their desires in secret and undesirable ways.  As part of his argument, Cutie takes on sexuality and desire as part of his thesis that the modern church (all churches) need to address sexuality as a part of man's normal, natural development, and to take it out of the shadows of secret and shame.  His arguments are strong, and seem to make a great deal of sense from my outside point of view, but I wonder how the Catholic church would tackle these issues of priesthood celibacy, women in the priesthood, and even birth control.

Dilemma is a very well written book, with a well focused point of view.  Although I wanted to understand more about his wife, what she thought or felt, or even more of the emotional turmoil behind falling in love, I came to realize that this was not the goal of his story.  It is very obvious that his story is not about the agonies of love, but about his struggle with faith.  As such, I thought it was an exceptionally written, fine tuned argument about man and faith from his own experience.  I read the book from cover to cover in one sitting and did not feel that it was gratuitous or even self-serving for that matter.  Yes, Cutie has a bias against celibacy in the priesthood and has strong feelings about problems within the priesthood, but I didn't feel that he was out to convince everyone to like him.  His real message was about a problem as he saw and experienced it and his own resolution.  Overall, I thought it was very well done.