Review: Mr. Darcy and the Secret of Becoming a Gentleman by Maria Hamilton 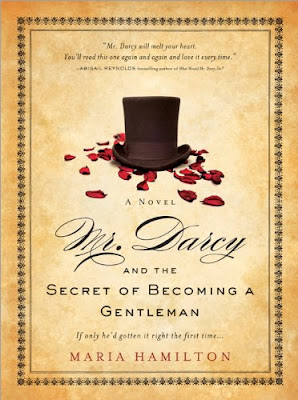 Synopsis:  From Goodreads, "When Elizabeth Bennet refuses his hand, Darcy is devastated and makes it his mission to change. By every civility in his power, Darcy slowly tries to win her affections, but Elizabeth is not easily swayed. Darcy vows to unlock the secrets that will make her his. He curses himself for his social awkwardness and appearance of pride, and sets out to right the wrongs he's done her family.  Elizabeth's family and friends misunderstand his intentions, and being in Elizabeth's presence proves to be both excruciating for the shy Darcy-and a dream come true. For the first time in his life, he must please a woman worth having, and the transformation leads him to a depth of understanding and love that he never could have imagined."

Review:  Overall, Mr. Darcy and the Secret of Becoming a Gentleman was a fun departure from the original story, asking the reader to consider "what if" Darcy decided to change from that first tongue lashing by Elizabeth?  Could he have changed and won her over by showing her who he really was?  These questions fuel this new story line as Darcy works to show Elizabeth that he isn't the pompous rich guy she has come to believe him.  He ends up showing back up at her home to interact with her family and to try to be more social.

With these twists, some other story lines drop out from the original.  I won't give away which ones those might be, but you can imagine who might or might not show up in the story if Darcy stuck around.  One interesting change is in Mrs. Bennet, who soon recognizes that Darcy might be a better match for her Jane than she originally thought.  He quite wins her over with his charm and pocket change!  Not only does he win her over, but he also fuels the gossip mongers who all think he has eyes for Jane.  That, of course, makes Elizabeth slightly jealous and confused.  Her intrigue leads her to consider this man she wrote off, to wonder if she made a big mistake in jilting him.

Romance is all over in this retelling of Pride and Prejudice.  For the most part it is all good, clean romance, with some later interludes that make for a dramatic departure from the story we all know and love!  I wouldn't say it's salacious in any way, but might be shocking.  At times I'll admit to being annoyed by the miscommunication and constant fact checking Darcy and Elizabeth demonstrated; they just seemed so unsure of what the other meant, that they were constantly self conscious of everything they said or did.  Eventually, the "I'm sorry, that's not what I meant..." felt overdone at times.  I do get that this added extra tension and work to Darcy and Elizabeth's relationship forced them to draw together more.  I guess I just didn't want them to have to always feel so insecure.

The "what if" story between Darcy and Elizabeth is a relaxing continuation of sorts, for anyone who enjoys Pride and Prejudice and likes to read other retellings.  The story is romantic and filled with human missteps that keep the story moving in a new direction, and although the outcome isn't surprising, the journey is different and new.