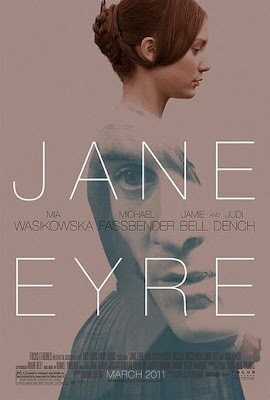 Jane Eyre is one of those grand novels, that if you've read and compared to Wuthering Heights, you probably came to a definite conclusion about which Bronte novel you liked better.  I was always a Jane Eyre fan, although I'll admit to really wishing Jane would have given Rochester a good kick in the shins through many scenes in the novel.  Wuthering Heights always disturbed me, with Heathcliff and Catherine's cruelty to one another, all in the name of love.  Ironically, Jane and Rochester also have a pretty cruel fated relationship.  Both are fairly complex characters, with troubled pasts and emotional baggage to pack around.  To this we add the complexity of class distinction and gender difference.  Therein we get the recipe for an angsty, Gothic/Romantic novel that we continue to read, film, and discuss.

This newest Focus Feature filming of Jane Eyre is well done.  My emotions ran the gamut, and I can say that I was pretty invested in the characters and their story.  The opening sequence starts with the scene in the novel where Jane has run away from Rochester and Thornfield Hall.  From there, the film is a set of flashbacks from her life, including her troubled upbringing, her time in the girl's school, and her time at Thornfield Hall.  As with some of the other film versions of the novel, this Jane is plain, but very pretty in her plainness.  Rochester seems, at least in my opinion, to be the wild card. He can either be slightly mad and scary looking, or you can go for the ruggedly handsome, leading man type.  In this case, he seemed a bit of both. 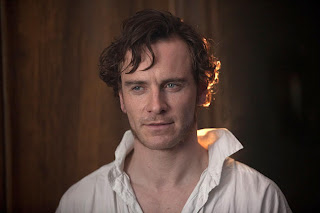 Let me be frank in saying that I've always thought that Rochester was a bit of a jerk.  In some sick, sadistic way, I found that jerk side of him made his eventual romantic side that much more charming and romantic.  You know, the bad guy the girl turned good, or the rich guy who hooks up with the poor chick?  It's all very Cinderella story, but in this case, Rochester isn't exactly a "Prince Charming".    Here's what I found interesting.  In the novel, Rochester seems to do a series of things to Jane that reveal that he gets that she's lower status, poor, and lacks opportunities afforded to him.  How do we know?  He makes rude comments to her.  He seems to lord his money over her.  He makes snide remarks about Adele and her mother.  He gets to know Jane a little, only to drag a woman he is supposed to be courting into the picture and into her very face.  He ignores her.  He commands her.  He dominates her.  He pleads with her.  He taunts her.  You get the picture.  Yes, he's wounded, and yes you get that he falls for Jane.  What I couldn't quite grip was the gentle touch they gave to the film's Rochester.  Were they trying to not annoy a modern audience?  Would we see Rochester's brusqueness as the exact opposite of romantic love and not care to see Jane with him?  I'm not sure if this was intentional or not, but it was interesting to consider.

This version has a real movie feel to it, with the blending of beautiful sets, scenery, and music.  The acting is very good, with little deviation from the novel, aside from some of the order in which they tell it, scenes they chose to condense or leave out, and some pretty sexy kissing going on.  Overall, it was an excellent film and one that I will definitely add to my collection! 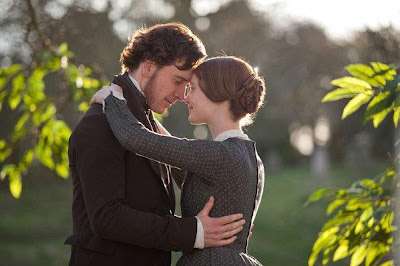