Yesterday I posted my review of Mr. Darcy and the Secret of Becoming a Gentleman and today I wanted to post a little about Maria Hamilton, the author.  I had a chance to ask her a few questions I've been thinking about, especially in connection with these Austen-related novels.

One of the things I've been wondering about is how our Austen authors come up with their ideas?  What sparks their interest so that they can find their own in-roads into these famous stories?  Here is some of what Maria Hamilton shared:

I have been a lifelong Jane Austen fan, rereading her novels with regularity.  About ten years ago when websites devoted to her books started to appear on the Internet, I began to become interested in Pride & Prejudice sequels and variations. The inspiration for my novel, Mr. Darcy and the Secret of Becoming a Gentleman, came from the flash of image I had of Darcy and Elizabeth in Hertfordshire at a large dinner with their heads bowed deep in conversation.  From that picture in my mind’s eye, I was motivated to write a story where circumstances would allow Darcy and Elizabeth to be in company slowly getting to know each other.  In Pride & Prejudice, Austen never allowed them the time to interact in such a manner once they overcome their preconceived objections and prejudices.  Instead, it is a luxury left only to Mr. Bingley and Jane during the early days of their courtship.  I had read many wonderful Pride & Prejudice variations, but none seemed to capture that moment of courtship.  As a result, I felt compelled to write a story where I could place Mr. Darcy and Elizabeth in various social settings and see how they behave.

In order to accomplish my goal, I introduce the reader to Mr. Darcy immediately after his rejection at Hunsford.  He begins to evaluate Elizabeth’s rebukes of his prior actions and decides to correct his mistake regarding Jane and Mr. Bingley much earlier. Doing so is harder to accomplish than he imagined and he is forced to return to Hertfordshire.  He asks Jane for a private interview in order to determine if she still has feeling for Mr. Bingley and Mrs. Bennett assumes that Darcy has come to court Jane.  Once Darcy is thrown into Elizabeth's company again, he vows to show her, by every civility in his power, that he that he can be a gentleman worthy of her esteem.  As Elizabeth and Mr. Darcy become reacquainted, he pursues her and a courtship evolves during a series of dances and dinners as they attempt to see each other without their prior misunderstandings.

While my story focuses on the dialog between Mr. Darcy and Elizabeth and their developing intimacy, I also wanted to see how the characters would react in some of the scenes that I wished were in the original book, but are not.  For instance, I wanted to explore how Darcy would ask Mr. Bennett for permission to marry Elizabeth, Darcy’s confession to Bingley that he was in love with Elizabeth and had wrongly separated him from Jane, Caroline learning that Darcy had asked Elizabeth to marry him (twice), and Darcy and Elizabeth transformations from suitors to husband and wife.  In doing so, I wanted to keep to Austen original intent but give the characters enough the room to act in new ways. I will let the readers be the judge. 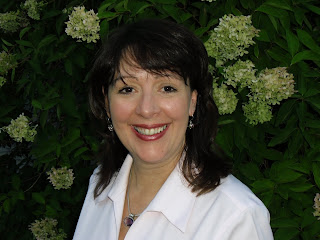 Here's a little about Maria Hamilton:

Maria Hamilton has been a lifelong Jane Austen fan.  Her first novel Mr. Darcy and the Secret of Becoming a Gentleman was published by Sourcebooks in May of 2011.  She is presently working on several projects including a new Pride & Prejudice variation. She attended Boston College where she earned a B.A. and then a M.A. in history.  She received her J.D. from Harvard Law School and presently works as an attorney in Boston.  Her interests include travel, cinema, the Red Sox, and bicycling.  She is perpetually learning Italian and hopes one day to attempt a complete conversation.  She lives in southern New Hampshire with her husband, two children, and her dog Poseidon.

If you are interested in Maria’s writing style, she has two Pride & Prejudice short stories available on the internet at http://www.austeninterlude.org/maria/maria.html.

Thank you to Maria Hamilton for stopping in "One Literature Nut" and sharing a little bit about herself and her interest in Pride and Prejudice.  I, for one, hope to see more stories out in the future!
Posted by Becky at 5/27/2011 03:04:00 PM