I was going back over the reviews I had written or needed to write and realized I had gotten so into the Fever series by Karen Marie Moning, that I jumped directly from book two into book three without blinking an eye!  If that isn't a plug for this series, then I don't know what is.  I'm not quite finished with the entire series, but wanted to post my Bloodfever review before I get too much farther into them! 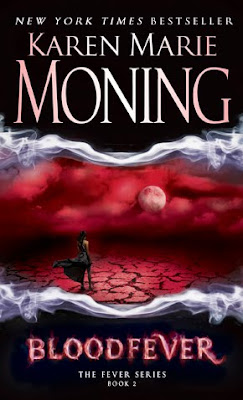 Synopsis:  From Goodreads, "MacKayla Lane's ordinary life underwent a complete makeover when she landed on Ireland's shores and was plunged into a world of deadly sorcery and ancient secrets.  In her fight to stay alive, Mac must find the Sinsar Dubh-a million-year-old book of the blackest magic imaginable, which holds the key to power over both the worlds of the Fae and of Man. Pursued by Fae assassins, surrounded by mysterious figures she knows she cannot trust, Mac finds herself torn between two deadly and irresistible men: V'lane, the insatiable Fae who can turn sensual arousal into an obsession for any woman, and the ever-inscrutable Jericho Barrons, a man as alluring as he is mysterious.

For centuries the shadowy realm of the Fae has coexisted with that of humans. Now the walls between the two are coming down, and Mac is the only thing that stands between them."

Review:  Mac has now learned a bit more about the world that took her sister from her and is now threatening the rest of humanity.  As overwhelming as it might seem, Mac is one of a small conglomeration of people (if you can call them people) who can fight the evil Fae from opening up this world to their kind and obliterating all of mankind and anything that is good in the process.  Now Mac realizes that this isn't just about the sister she lost, but is much, much bigger.

Once again, book two is not a stand alone type of a novel.  Book one was very much a set up to learning the rules and procedures of this magical world, and we have continued to learn so much more in book two.  As a Sidhe Seer, Mac can sense the evil Sinsar Dubh book, which is one of the reasons that manly man Jericho Barrons has kept a close rein on Mac.  Together they have sought out ancient relics that contain magic, and according to Barrons, will help them get closer to the magic book.  Why do we not believe him though?  Barrons is all that a complicated mystery man should be; he's handsome, rugged, and even a bit sadistic.  You know that he cares enough about Mac to keep protecting her and giving her information about some of the magical world, but not enough to really lay it all on the line.  We aren't even sure what he even is at this point!  Why can't the shades touch him?  What's the deal with that?  Is he just playing her and going to end up being the bad guy, or is he some "wounded" soul and really a good guy at heart?  We don't know.

By the end of this second installment, I now feel completely invested in what will happen to Mac.  She has pushed the boundaries of her powers and learned how to protect herself, without Barrons help.  Mac is gutsy and vulnerable, which make her a great heroine for this series.  So far, I've really gotten into the series and now feel much more eager to finish the series.  Once you get the gist of this magical world, the action and mystery really suck you in!  Honestly, it's not like any other paranormal series I've ever read.