Let me not be shy about my love for Captain Wentworth.  His ability to be so long suffering and to carry a flame for Anne Elliott across the years has always made him one of my all-time favorite heroes.  How could I then pass on a lovely novel set in the present day in Lyme?  That's not it though.  It's on the set of another filming of Jane Austen's famed Persuasion.  In short, Victoria Connelly's Dreaming of Mr. Darcy was my perfect fit. 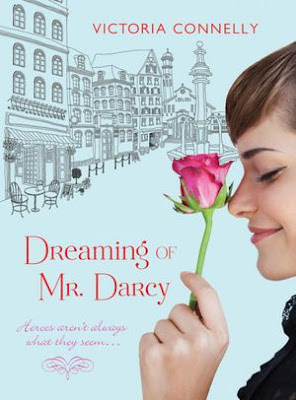 Synopsis:  From Goodreads, "Fledgling illustrator and Darcy fanatic Kay Ashton settles in the seaside town of Lyme to finish her book, The Illustrated Darcy, when a film company arrives to make a new adaptation of Jane Austen's Persuasion. Kay is soon falling for the handsome bad boy actor playing Captain Wentworth, but it's the quiet screenwriter Adam Craig who has more in common with her beloved Mr. Darcy. Though still healing from a broken heart, Adam finds himself unexpectedly in love with Kay. But it will take more than good intentions to convince her that her real happy ending is with him."

Review:  I really enjoyed reading Dreaming of Mr. Darcy.  Considering it was more about Captain Wentworth, including plenty of references to reading Persuasion, I felt like it should have been Captain Wentworth that we were dreaming about!  That wouldn't have lost me for one second.

When our heroine settled into Lyme and her new B&B, she didn't seem to be some lovelorn woman trying to shake off a dodgy past.  Instead, Kay seemed to be a sweet girl who was living her dream to live on the sea coast.  I really loved the premise behind Kay settling into Lyme and opening her B&B, only to have the newest film crew becoming her first customers.  There is a fun, bumpy love story between Kay and the star playing Captain Wentworth, but a variety of other love interests for other characters are also running about.  The biggest love triangle though becomes one that no one knows about other than Adam, who has fallen for Kay from first sight, but can see that she is falling for the big movie star.  In short, he can see what's going on, but can't resist his love for Kay.

If there was one wish I could have made for this fun, romantic sort of modernization, it would be a slower build up to the relationships.  Call me a cynic, but I would have liked to see Adam come to realize his interest in Kay and not be smitten from the first moment.  I think that would have helped me cheer him on a bit, rather than see him as a romantic sap.  He was such a lovable character that I spent a good portion of the book feeling like our flighty heroine might not be good enough for him!  In the end, it all works out and there are moments of delightful tension.  Overall, I would say that it is the perfect night by the fire type of read and one that I'll be sharing with my girlfriends who love Austen-esque stories.

Now, where can I get myself a good deal on a little place on the English coast?  It sounds pretty promising.


*FTC Disclosure:  This review was based on a review copy sent by the publisher.