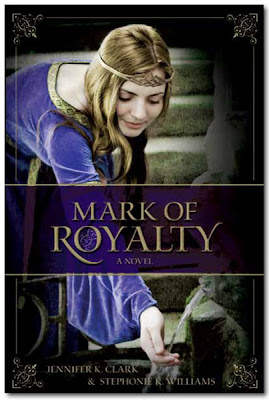 Synopsis:  From Amazon, "At a time when royal infants are marked at birth, a royal advisor makes a terrible misstep, and an infant princess must be secreted away to save her life. Named Sarah by Miranda, the woman who agrees to raise the child as her own, the girl is unaware of her royal heritage, even though Miranda has done all she can to pair Sarah with the king's nephew, Lord Chad. But unexpected events prevent the expected betrothal. Determined to fulfill her devoted mother's wishes, Sarah reserves her heart for Chad despite her growing affections for another man. But as plots against the crown unfold, someone accidentally discovers Sarah's mark of royalty, setting the stage for discoveries that will shake the kingdom to its core."

Review:  As far as historical reads go for teens, this was a pretty cute one.  There is a definite Ever After vibe to the story that keeps you flipping pages, routing on Sarah from the very beginning.  Having been passed off at birth, marked with a tattoo that was the insignia of her royal lineage, Sarah grew up knowing nothing about her past.  All she knew was that Miranda, her adopted mother, was her protector and biggest fan.  Going against the grain of other "Cinderella" tales, in this one it is her step-father who comes to resent her, especially after Miranda's death.  Sarah then has to try to impress the king's nephew, Lord Chad, who seems more bent on her step-sister.  Along the way she meets a different, mysterious young man, who she meets while out on one of her outdoor adventures.  Little does she know, this young man might just be the real key to her happiness and freedom.

In characteristic fairytale-like style, this story has a bit of royal intrigue, a bit of romance, and a bit of history all rolled into one.  While the use of descriptors in the story (adjectives and adverbs) were used in odd ways and too often, you soon become accustomed to them and focus more on the story than some of the language issues.  Honestly, I think that teen girl readers would really love this book for its ease in storytelling and sweet romantic tale.  I have no doubt that girls would really enjoy this slightly different telling and wouldn't think twice about how the story was told.