Review: Before Versailles by Karleen Koen

Ever since I had a chance to  visit Paris back in June, I've been a bit obsessed about books set in Paris or Versailles, to be specific.  It took a little searching, but there really are a number of great books set in France, so I've been very lucky.  One new book published just last June was Before Versailles: A Novel of Louis XIV by Karleen Koen.  I really loved the historical bent of this novel and how it gave the reader a view of how it was, not long before Versailles was built.  This has gone along perfectly with my current reading of To Dance With Kings, which is basically picking up where Before Versailles left off.  It has been quite an education, through fiction! 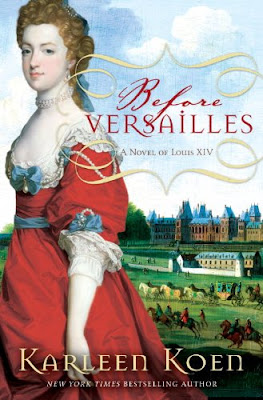 Synopsis:  From Goodreads, "After the death of his prime minister, Cardinal Mazarin, twenty-two-year-old Louis steps into governing France. He’s still a young man, but one who, as king, willfully takes everything he can get—including his brother’s wife. As the love affair between Louis and Princess Henriette burns, it sets the kingdom on the road toward unmistakable scandal and conflict with the Vatican. Every woman wants him. He must face what he is willing to sacrifice for love.

But there are other problems lurking outside the chateau of Fontainebleau: a boy in an iron mask has been seen in the woods, and the king’s finance minister, Nicolas Fouquet, has proven to be more powerful than Louis ever thought—a man who could make a great ally or become a dangerous foe . . ."


Review:  I really loved reading Koen's tale of King Louis XIV and his court.  Filled with intrigue and so many characters that I could hardly keep them straight, there are a number of character-driven stories going on at once.  I've always wondered if the promiscuity of these monarchs was completely just due to their own personalities and appetites, or also driven by marriages that were made without their involvement at such a young age.  When two young people are forced to marry, as a way of uniting two countries, who is to say that they know anything about love, romance, or the heart?  It does seem like they are seemingly coached into romantic intrigue.  It's just something I found interesting to consider, especially as we watch young Louis really only driven by relationships with women he met in the court around him.  In other words, like we see today, he had a group of people he "hung out with" and then clicked with some of the women, who later became his courtesans.  It's all very, very interesting.

There were many different characters to follow in this story, and I first had to establish who was supposedly "good" and who was "bad."  That list was a bit static, but once I kind of knew the cast of characters, the story fell into place a bit more.  Although the novel could have delved into even more about political and social issues facing France during his reign, this was a novel about relationships, conspiracy, and intrigue, all surrounding a need for power, attention, and control.  Not really told from one point of view, we get a nice look at both men and women in this story, to get a truly interesting tale of King Louis XIV.  I really enjoyed it.