Oh, how I love Sharon Lathan's books.  Seriously, Sharon's books are a much needed break from my own reality and have helped mellow the romantic cynic in me.  Forget what I think "reality" is in romance, I want Sharon's version!  Recently after finishing our first term at school, I felt like I was at my breaking point.  I picked up Sharon's book, for what I thought would be a couple chapters for a quick work break, that turned into a complete devouring of her book.  In one sitting, I started and finished Miss Darcy Falls in Love and can say that it was just what I needed. 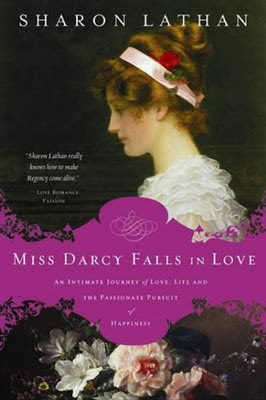 Synopsis:  Shifting away from our most famous Darcys, Miss Darcy Falls in Love follows Fitzwilliam's prized sister Georgiana in a European tour that actually sent Elizabeth and Fitzwilliam home in the previous installment, to welcome their second child.  In the meantime, Georgiana finishes up her tour, stopping in France to visit friends.  There she meets up with Sebastian Butler, a fellow music lover who has been allowed to leave his land-owning responsibilities by his father to pursue music at the famous Conservatoire in Paris.  Before entering school, he and Georgiana strike up a great friendship, centered on their interest in music.  Sebastian and Georgiana both, are too conservative and gentle-minded to consider that their friendship might actually be a blossoming love, simply regarding one another more as the best of friends.  That is, until dashingly handsome Lord Caxton, teacher at the Conservatoire, takes an interest in Georgiana.  Somehow, with the push of another suitor, perhaps Sebastian and Georgiana might realize their friendship as something more?

Review:  In the characteristically romantic style of author Sharon Lathan, Georgiana Darcy's story feels nothing like a departure from our most famous Darcy couple, but feels more like a beautiful continuation within the family.  For fans of Pride and Prejudice, I think that most readers will agree that we want to see Georgiana happy in love someday, especially after all that she endured with George Wickham.  Now as an adult, and seeing the wonderful relationship of her older brother with Elizabeth Bennet, nothing could be better than to see Georgiana equally as happy in love.

Picking up where The Trouble With Mr. Darcy left off, we follow Georgiana home through Europe.  Focusing less on the travel aspect, and more on character development, we meet friends of the Darcys such as with Sebastian Butler.  Sebastian is not an ordinary character for his time, in that he is not necessarily aloof or terribly complicated.  That does not mean that he was not interesting.  His sweet character was kind and generous around others, but it was his passion for music that lent him that certain cluelessness that we love in Austen's men.  Sebastian, in all his gentleness, has made fast friends with Georgiana and shared a real passion for music that bonds the two.  Their friendship was sweet and delectable.  As for Lord Caxton, who comes along to complicate it all, he seemed more like the villain than the possible love interest, which made it all the easier to love Sebastian and root for his awakening to what he had with Georgiana.

Sharon's novels do contain sensual scenes, that are grippingly romantic.  If that is not your scene, let me warn you now.  I wouldn't say that this novel is nearly as sensual as previous books though.  I get that some people do not enjoy having a romantic interlude spelled out for them, but I can't say that is a reason to completely denigrate an author's story.  Sharon's writing has never felt overplayed, in my opinion, and her writing style has this period feel to it that is stunning.  As readers, we not only get swept away in the beauty of her writing, but we also develop a greater interest in her characters.  In every way, these characters feel real and applicable to us, with their dreams and emotions spelled out on the page.  Mixing the period with the timelessness and complications of romantic love, I simply can't get enough of the romance Sharon writes.  Beyond being a fan of all things Austen and loving this period to begin with, Miss Darcy Falls in Love is a delectable and delightful romantic romp back to a time when men and women held back on saying what they felt, yet showed it in a number of reserved, romantic ways.  Although the sixth in the Darcy saga, Miss Darcy Falls in Love can be read as a stand alone.  And for cynics of romance, which I would usually count myself a part, these books make me want to believe!

*FTC Disclosure:  This review was based on a review copy sent by the publisher.
For more information on the novel or on the writer of this great series, check back on Friday for a lovely interview I had with Sharon Lathan!
Posted by Becky at 11/14/2011 08:00:00 AM