Have you ever made that Amish Friendship Bread?  It's been awhile since I received a bag of starter, but I have to admit to being freaked out by the stuff.  There seems to be something kind of wrong about not refrigerating a food product. Having said that, Friendship Bread by Darien Gee didn't freak me out at all, and as you can see from the book and title, it has friendship bread throughout the story.  I'm still not sure how/why the bread works, but I will admit that it tastes pretty good, and I haven't heard of anyone keeling over from eating it, so I guess it must be all right! 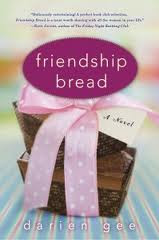 Synopsis:  Centered on a multi-character story of women in a small town in Illinois, each woman has a unique story of love, lost, and longing.  We are introduced to Julia Everts, mother of one daughter and wife to a wonderful husband who would do anything to make her happy.  Their wound centered on the earlier loss of their young son, long before their daughter was born.  With his loss came a lifetime of wounds that threatened to tear the entire family apart.  Another character, Hannah, has moved into town after her fellow cellist husband was found cheating on her.  She had not only given up on her career in order to marry her husband, but she had also agreed to move to this small town under the idea that she would start the life of a housewife with the husband she loved.  Now, she was facing divorce and a lifetime of unhappiness, or so she believed.  Finally, we have Madeline, who owns and operates a local tea shop and bakery.  Madeline is the oldest in the group, with grown children of her own, and a love for cooking and making other people happy.

To this town, filled with many other characters and stories, these three women unite in the tea shop one day to reveal heartaches and longings.  Having had "friendship bread" starters dropped off at their homes, it strangely transports their homes and lives into places of conversation and sharing, with an eye for others who also suffer in silence.  Together, the three women make fast friends.  Stories are revealed, and wounds begin to heal--all over a loaf of nice, warm friendship bread.

Review:  I really love the clear, freshness of Gee's writing.  There is a simpleness to it that makes the structure flow, even when the story itself is filled with complexity and difficulty.  In short, you can get lost in the story, understanding exactly what you suppose the author meant and wanted for her characters and story.

Friendship Bread has a lot of stories going on at once.  At times I wanted to just settle down to one, but I finally worked through these narratives to get to the meat of their collective story.  The stories felt familiar, with things that women all over the world experience, but in a way that we cared about what happened for each character.

In a funny way, the bread starter was the thread that not only pulled the characters together, but it also pulled the story together.  That single thread kept families talking and characters intermixing with one another, helping to lift other people along the way.  The story surrounding Julia Everts and her family dominates much of the story, and I really cared about what happened to her, especially in her marriage.  I almost wish we could have spent more time with them, but I got the overall picture by the end.

Although it contains recipes and the cooking and sharing of food, this is really about the characters and how something as simple as a bread starter could pull people out of their busy lives and back into their families and relationships.  I liked the book and think that the recipes at the end of the novel are just an added treat.  I plan on sharing this one with my mother, who I know will love all the complex stories and friendships.  This might just be one of those stories I share with other women I know, just like those bags of friendship bread.

Check out "Friendship Bread Kitchen" for more information about the novel and lots of great recipes that you can make from these starters.

*FTC Disclosure:  This review was based on a review copy provided by the Amazon Vine program.  No monies were exchanged for this review.

Have you ever gotten a bag of this friendship bread, and have you ever deviated from the recipe to make your own variations?
Posted by Becky at 11/16/2011 07:59:00 PM