Review: The Statistical Probability of Love at First Sight by Jennifer E. Smith

Time to get back to some reviews!  I've given up on a few, but I still have some books that I'd like to get around to sharing.  There's nothing like a Spring Break to put me back on my feet again! 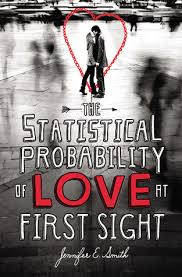 Synopsis:  From Goodreads, "Today should be one of the worst days of seventeen-year-old Hadley Sullivan's life. Having missed her flight, she's stuck at JFK airport and late to her father's second wedding, which is taking place in London and involves a soon-to-be stepmother Hadley's never even met. Then she meets the perfect boy in the airport's cramped waiting area. His name is Oliver, he's British, and he's sitting in her row.

A long night on the plane passes in the blink of an eye, and Hadley and Oliver lose track of each other in the airport chaos upon arrival. Can fate intervene to bring them together once more?

Quirks of timing play out in this romantic and cinematic novel about family connections, second chances, and first loves. Set over a twenty-four-hour-period, Hadley and Oliver's story will make you believe that true love finds you when you're least expecting it."

Review:  At the end of 2012, I selected The Statistical Probability of Love at First Sight as one of my top reads.  This was, for sure, a favorite of mine for its range of intense emotion, London setting, and likable characters.  All taking place within the course of just one day, Hadley Sullivan meets Oliver on a plane ride over from the US to London.  Hadley is not a happy camper on her journey though, as she is headed to her father's wedding to a woman who Hadley has yet to meet.  Oliver surely helps her take her mind off the journey and what waits on the other end.

I think that this story can be likened to other stories of two strangers who meet on a plane and share their lives, never to see one another again.  In this story, Hadley spills her story to Oliver, who tells bits of his own tale behind why he's heading home.  The two make a real connection, but at the terminal they head off in their own direction.  You know, however, that this can not be the end of these two characters.

This was an easy to love story, filled with emotion and well-rounded characters.  I think that Hadley's story with her father was tense and felt very real.  I wanted to like her dad and his new bride, but seeing it all through Hadley's eyes had me hating them for their insensitivity.  Her anger and sorrow at her father's choices gave the story a depth that I appreciated.  Oliver has his own back story that we learn about later.  On the whole, I think it all adds up to an angsty, romantic story that grabs you and forces you to read it all in one sitting.  What can I say?  If you want a quick, romantic read, then this is a perfect curl-up-and-read YA novel.  I can't wait to read more by Jennifer E. Smith!