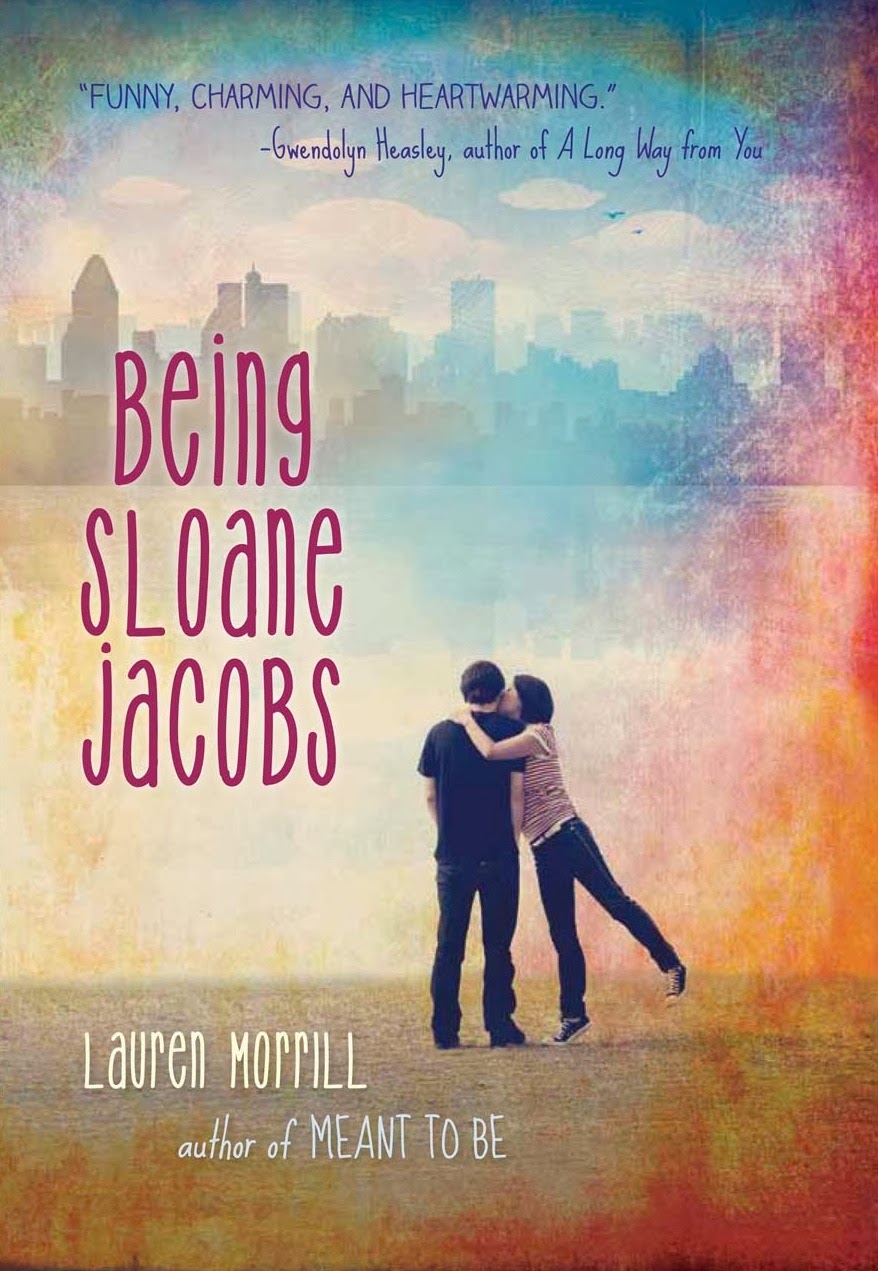 Synopsis:  From Goodreads, "Meet Sloane Emily Jacobs: a seriously stressed-out figure-skater from Washington, D.C., who choked during junior nationals and isn’t sure she’s ready for a comeback. What she does know is that she’d give anything to escape the mass of misery that is her life.

Now meet Sloane Devon Jacobs, a spunky ice hockey player from Philly who’s been suspended from her team for too many aggressive hip checks. Her punishment? Hockey camp, now, when she’s playing the worst she’s ever played. If she messes up? Her life will be over.

When the two Sloanes meet by chance in Montreal and decide to trade places for the summer, each girl thinks she’s the lucky one: no strangers to judge or laugh at Sloane Emily, no scouts expecting Sloane Devon to be a hero. But it didn’t occur to Sloane E. that while avoiding sequins and axels she might meet a hockey hottie—and Sloane D. never expected to run into a familiar (and very good-looking) face from home. It’s not long before the Sloanes discover that convincing people you’re someone else might be more difficult than being yourself."

Review:  In this fun story, the seemingly implausible becomes plausible.  What if you really didn't want to face a challenge that everyone expected of you and there was another person with your name and looks to take your place?  Okay.  So it seems, as I mentioned, implausible; however, in Being Sloane Jacobs, we get to run with the possibility.  One Sloane wants to escape the high pressure of figure skating, while the other thinks a break from hockey camp might be nice.  Why not just switch places?  They'll both be on ice, right?

Although it felt far-fetched at times, the story and characters were so fun that I quickly got lost in the idea and just threw that aside and went with it.  I liked these "Sloane" characters and genuinely wanted to see what this experience did for both of them.  My prejudice going into it said that I wanted Sloane Devon, the hockey player, to have some big epiphany, but Sloane Emily was interesting to watch as she went from ice skating into hockey.  I loved watching their preconceived ideas about one another crumble, while other character traits they had obviously ignored start to flourish a bit more.

This really was a fun book.  While you felt you knew where things were headed at times, you still couldn't know for sure and had to keep flipping pages to find out.  These characters came to life and were fun to watch.  I had a great time reading this book and almost felt like I needed to go put in a good session at the gym after all their training sessions!  Thankfully, I won't need to take body slams from anyone or have to do flips on a single blade--as entertaining as that might be for anyone watching.  Overall, I have to say this was a great read.
Posted by Becky at 1/26/2014 11:14:00 PM 4 comments:

Mini Reviews: YA Catch Up

Here are some YA novels I need to play catch up on.  I thought I'd do some short mini reviews in an effort to share what I've been reading. 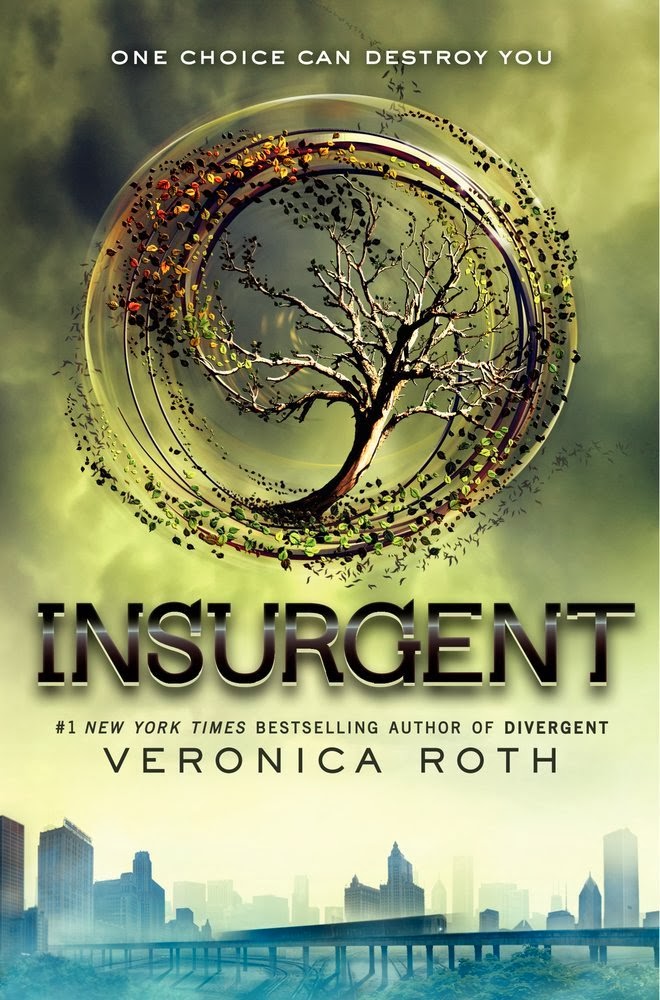 Insurgent by Veronica Roth--In book two of the Divergent series, we find the fall out from the simulation and Tris trying to deal with her initiation into Dauntless.  Book two picked right up where the first left off and there is a lot of back and forth in this one.  We learn more about the role of the other factions and find that there is still a lot of intrigue confusing Tris about who is good and who is bad, who could be right and who could be wrong.  I really liked this installment, but will say that at times I was exhausted by what was not shared between Tris and Four.  I found myself yelling at Tris to just trust Four and tell him what was really going on!  Since I have just started Allegiant, I happen to know that will come up again, so I will be hearing more about that later on...  Still, an amazing read.  The last 75 pages or so really locked this one in for me. 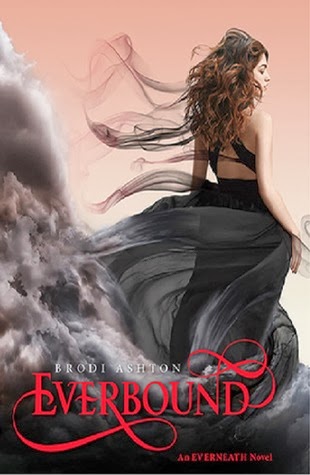 Everbound by Brodi Ashton--Yet another second book in a series, this is the next in the Everneath series.  Book one, based on the Persephone story continues here with Nikki grieving her boyfriend Jack and his sacrifice for her into the Everneath.  How can she explain his disappearance and how can she get him back?  In this installment, Nikki has to enter the Everneath and figure out how to stay connected to Jack.  While I sometimes got confused with the layout of the Everneath at times, by the end, I was shocked and flipping pages like crazy to find out what was going to happen!  This is an exciting follow up to book one and not a disappointing sophomore follow up at all.  In fact, I'm eagerly waiting for the third book. 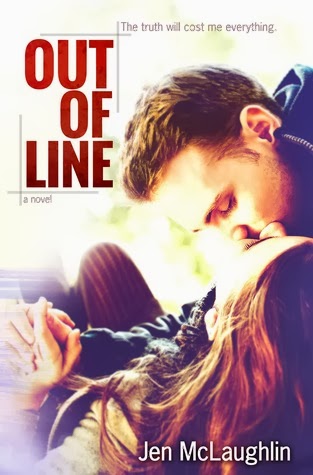 Out of Line by Jen McLaughlin--Technically considered "New Adult" more than Young Adult, this was a book I had seen discussed a bit online, so I decided to read it and give it a try.  I'm not sure I should have done that though, as my reading experience was a bit painful.  The story was about Carrie, the daughter of a Senator being tailed by Finn, the Marine.  However, Carrie thought she was away at college and free, not realizing that she was being tailed by secret protection.  Finn and Carrie became friends and then more than friends, but then how could Finn tell Carrie that he was being paid to protect her? Honestly, I really should have stopped reading this book around page 50.  The story became pretty predictable and I found it irritating that the lies and sexual tension were the main crux of the story.  I understand that the heightened tension, adult situations, and age of the characters all put it in the category of New Adult, but I can't shake the predictability of the story or the non-stop lies that kept the story rolling.
Posted by Becky at 1/23/2014 08:00:00 AM 2 comments:

Review: The Passions of Dr. Darcy by Sharon Lathan 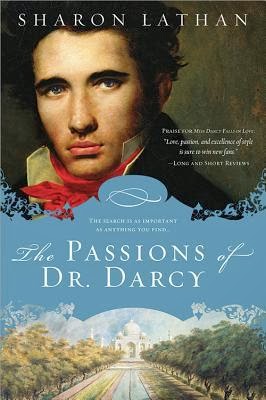 Synopsis:  From Goodreads, "While Fitzwilliam Darcy is enjoying an idyllic childhood at Pemberley, his vibrant and beloved uncle, Dr. George Darcy, becomes one of the most renowned young physicians of the day. Determined to do something more with his life than cater to a spoiled aristocracy. George accepts a post with the British East India Company and travels in search of a life of meaning and purpose.

When George Darcy returns to Pemberley after many years abroad, the drama and heartbreak of his travels offer a fascinating glimpse into a gentleman's journey of self-discovery and romance."

Review:  In previous novels by Sharon Lathan, we've been introduced to George Darcy, and yet we've known very little about his back story.  In this stand alone novel, we finally learn about the talented doctor and why he gave Fitzwilliam the advice he gave him in the other books--his life is an obvious collection of love and pain that he tidily tucks away and uses judicially.

As a young doctor, George set off for India to serve there and learn.  He is taken on by an amazing Indian doctor and taught local medical practices that go beyond any of his western medical training.  Over time, George grew in talent and respect as a doctor, yet love continued to be elusive in a traditional sense.  We find that over time, George has almost a series of experiences that we follow with him.  He experiences love and loss, along with professional success, and yet stays in India far from his English home until his story intercepts with Fitzwilliam and Elizabeth's and he returns home with an ocean of experiences in his heart.  As readers, it now makes perfect sense why he is the person we have read about in previous installments of Lathan's series.

In characteristic, romantic fashion, Lathan has crafted another beautiful tale.  In the beginning I was sad for what seemed like continual changes to George's life, but I could see that over the course of the novel how the experiences George had, created the self-assured man that he was in the end.  The journey seemed long and painful at times for poor George, but I think that while fictional, he definitely became real to us as readers.  Once again, I enjoyed Lathan's tale of the Darcy clan.  These are romances with romantic moments, but so worth it for readers.
Posted by Becky at 1/21/2014 08:00:00 AM No comments:

I'm back to the keyboard today--finally.  Life spun maniacally out of control after Christmas Break with our end of term at school, so I literally got next to no sleep for ten days.  I had 20 hours of sleep over six days, then crashed one day, went right back to four hours of sleep a night for one more week of school to start a new semester.  It wasn't just at school, but in my online job as well.  They had finals, so it was the mania of students who had procrastinated an entire semester and decided to do everything in two weeks.  As you can imagine, I'm happy to now collapse into a heap of fatigue over this three-day weekend and try to finally log back on!

Today is a monumental holiday in terms of humanitarian work and giving back, as Martin Luther King Jr. was an amazing humanitarian, activist, and leader who heralded a change that called for the good in all of us to come forward.  I've thought a lot about his bravery today and ways that I can be brave in my personal and professional life.  I don't want to go off on a long, philosophical post, but I think we can agree that there is much that we can still do to achieve King's dream of equality for so many.

Well, I hope that over the coming days and weeks I can find some balance and write a bit more.  I'm hoping to do some mini book reviews and even get onto some film reviews before the Oscars in March.  For tonight, I'm off to write a few posts and then escape into some more reading before this long weekend is over!