Review: The Masque of the Black Tulip by Lauren Willig

In the midst of a busy lifestyle, there's nothing like being able to still get in great, fun books by getting audio books. Thankfully, over the last week and a half, I was able to listen to the follow up in the Pink Carnation series. Since I recently listened to book one, The Secret History of the Pink Carnation, I was excited to move along in the books to see how the series continued. 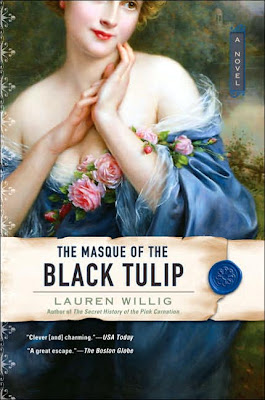 Synopsis: Continuing to bounce between the present-day academic, Eloise Spark, who is working on her dissertation and now a young Henrietta who has taken the place of the Pink carnation, and who is the younger sister of Richard (from the previous book). Henrietta might be considered a junior spy of sorts, but back in England, and watched over by her brother's good friend, Miles, there seems to be little to spy out other than her new-found crush on Miles. As chums growing up, Miles nor "Hen" (as they call her) have ever really looked at one another as love interests, and in fact, have been more like siblings; however, now that they are both adults, their mutual interest in one another has developed.

In the midst of the budding relationship, there are still French spies amongst them, but no one is quite sure who they are. Both Hen and Miles spy out different associates that they suspect, yet never really communicate their work as spies, nor coordinate. As Miles and Hen's relationship turns into full-fledged romance, their lives are in jeopardy, and to protect their new love, they have to find and put away the French spy who is out to disable The Pink Carnation for good.

Review: If the story plot sounds complicated, it really isn't. While it jumps around, pulling you from character to character, making you wonder who might be a spy, the real story centers around this complicated relationship and emotional dance between Henrietta and Miles. Although you realize there is a spy story going on, the tension mainly focuses on the misunderstandings and social pressures between the two love birds.

As with the last story, there is a good deal of romance involved in the story, but isn't developed until the later part of the novel. In this particular installment, there seemed to be less storytelling done from the present, which I actually missed...strange enough. I have been curious about Eloise, and can sense that she has developed feelings for the man who owns the journals she is reading. Honestly, I did want a bit more from the present, and grew to care a little more about our grad student. For some reason, now that she has uncovered the story behind The Pink Carnation, I wanted to know more about what Eloise was going to do with her story, and hope to get more in the novels that follow!

Overall, I have enjoyed these stories and am looking forward the the next installment. This second book leaves you with a bit of a cliffhanger with Eloise, and dropped Henrietta and Miles a bit, even though you knew they were all right and happy. There is a certain playfulness to these stories that I find interesting, and I enjoy following to see how the spies will catch their enemy, and how their female spy love interest will help them. These really are fun to follow, and while you could probably read them individually, I do think you need some back up from the previous story to really dive in. However, if you like period dramas with a bit of romance built into a spy thriller, then you might enjoy these. 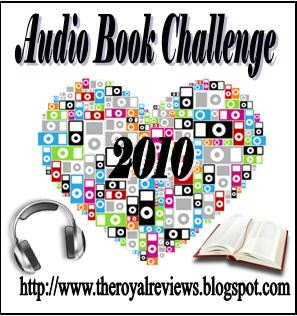 For more information, see: The Masque of the Black Tulip