What an exciting little book! I finished this book several days ago, but haven't posted yet because I was digging through my pictures from my trip to 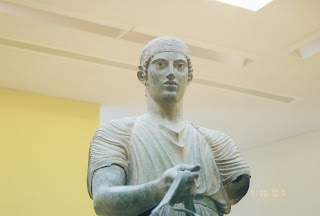 Greece to see if I had a picture of Delphi that I could put up. Well, the one disc that held my Delphi pictures read as "empty" and needs to be taken in ASAP! I do have pictures though of the famous "Charioteer," one of the most famous existing bronze statues, that is featured in

the museum there and is mentioned in the novel. I will say, that he is an amazing thing to behold. He not only has these amazing little curls on his head, but has glass eyes and eyelashes! Okay, enough about the "details" featured in the book, and on to the book itself.

Synopsis: One morning as Camilla sits in a coffee shop in Athens, 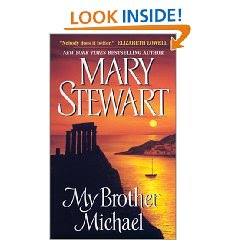 Greece, an unknown man approaches her with a set of car keys and an order to get the car sitting outside to "Simon," as it is a life and death situation. Camilla realizes she has been mistaken for someone else, but now has this car to deliver, and heads out towards Delphi to find this Simon character. From there, she does meet a man by the name of Simon, who saves her from the windy, narrow roads of Greece to help her take the car on to its journey's end. We're left unsure if this Simon is the one spoken of earlier, but this man with her is as much a mystery as what has been left her. We find that he had a brother named Michael who died in Delphi years earlier, and from there, you are rewarded with constant glimpses of a mystery and sweet romance that unfolds a chapter at a time.

Review: As I have mentioned before, I am not one who usually enjoys mystery, but this book feels more like some sort of thriller to me. Maybe it was the fact that the first half of the book, Stewart spends her time describing Greece, its people and food, and wonderful antiquities that had me (since I honestly want to spend my dying days on a Greek island), but I thought that the story sold itself more as an intriguing thriller that led you to want to know more about who gave Camilla this car, who is Simon, how did Simon's brother Michael die, what role does the ancient city of Delphi have to do with it all? 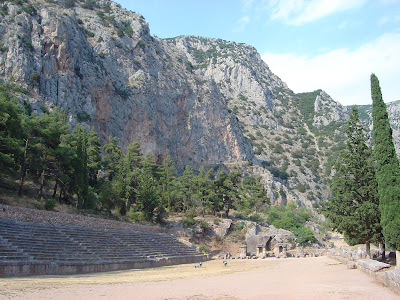 (Stadium at Delphi, and top of the city.)
I will be honest in saying that because I've been to Delphi, I struggled to picture some of the landscapes Stewart describes. For instance, the place that Simon stays is supposedly a jaunt (of sorts) over the ruins to where Camilla is staying in a hotel at the foot of the hill. I'll say from experience, that Delphi is no little hill! We had to hike up to the highest spot of Delphi, which was a city that switchbacks up the side of a veritable mountain/cliff, looking down on a beautiful valley below. By the time you climb to the stadium track at the top, you're pretty much looking up a cliff of sorts. Maybe down on one end there are more trails that weren't included in our climb, but I was amazed at how simply Stewart kept sending her main heroine home over the ruins of Delphi to her hotel! And at night, no less! Wow...that was one brave chick! 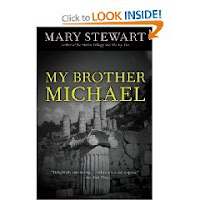 Altogether, I found Stewart's novel a fantastic read! I would definitely recommend it to anyone who enjoys a thriller, sprinkled with a little underlying romance. This is a clean novel, with plenty of excitement to leave you tearing through the last 150-200 pages in one sitting! It also looks like the publishers are re-releasing this novel in November with a new, revamped looking cover! If you want a nice thriller for the summer, look no further.