Review: The Stand by Stephen King 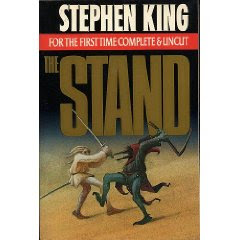 I did it! I finished my first Stephen King without putting it in the freezer (like Joey on Friends) or out in the hall at night (like my friend Doc) so that I could sleep at night. (Although, I don't think I would do either because it was on my wonderful Kindle!) This review has been a long time in coming, and I have to say that I'm really proud of myself for diving into a genre and author that had previously scared me a little. Before I go much farther, let me give a brief synopsis of this nearly 1200 page novel. :)

Synopsis: Imagine a pandemic. Imagine the worst flu ever. (No, we're not talking about the swine flu!) Now imagine what you would do if everyone around you were dying, and you somehow managed to live through it all. Would you flock to whatever human being you could find, regardless of how weird, strange, or aberrant they had been or were? In brief, The Stand tackles a global pandemic and considers what we would do as humans, what kind of a society we might form, and how we would survive. Now add onto that a Stephen King-esque twist, a psychological twist that has everyone dreaming the same dark dream of an evil man. Who is he, and how can they get the horrid dreams to stop?!? Now you're headed into a completely different, more sinister world created by King, all for your consideration.

Review: Other than having said that I've never read a Stephen King novel before, I have to add to this story. I had a student this year that couldn't pull a passing grade to save his life, yet never really tried to either. He would sit in his desk with a book, blocking out the world, and never bring a paper to class, nor turn one back in! Here's my story though...how can you not LOVE a kid that reads nonstop? He would pack in a different novel every couple of days, tough guy that he was, and regardless of any ribbing he got from his buddies, he kept on reading and loving it. I struck up a conversation with him during announcements, and I really knew this kid was a gem! Yes, he had troubles, but he was also one of the brightest, most astute kids I've seen. I quickly found though that we read completely different genres! He loved sci/fi, fantasy, thrillers, mysteries, and horror. While I love historical, classical, romance, chick lit., ethnic lit., etc. OPPOSITES. Okay, I wax long in my story. I had this student write me a list of suggestions, so that I could try to get out of my comfort zone, and this was one at the top of his list. After getting my lovely kindle, I ordered it for really cheap, and off I went! Can't wait to tell him I've finished.

With that back story behind me then, I'll say that I really did genuinely enjoy reading The Stand. It was creepy, but it was never so creepy that I felt like some Satan-like creature would jump out of my closet, or that I would wake with bad dreams. (Not like when I finished The Cement Garden and readily went in search of a Disney-esqu film to calm my troubled soul!) In fact, I found the storyline one that I had to bring up with people all the time, hoping that I could find someone to discuss the book with me! The story moves around a lot, has a lot of characters to follow, and is broken into parts or sections. I did have moments where I thought it was dragging along, but realize that in order to bring all the characters together, King had to develop the story. Although reading about a pandemic in the middle of our recent media frenzy over the swine flu made it ineresting, I also was really intrigued by the entire process for hospitals, government, etc. in treating the sick and eventually disposing of the dead. In fact, what would you do if your mother and father died, and you couldn't find a soul alive to help you with the bodies? Could you dig a grave and bury them yourself? Just one of a MILLION "what would you do" scenarios presented in the novel. I don't know if King would call it a "psychological" thriller, but I know I did. Overall, I thought the story and characters were well developed and believable. As a work, it was engaging and felt fresh, so I give my student kudos for recommending it to me, King for coming up with this interesting twist on a pandemic, and myself for finishing it!

If you're nervous about King, and don't mind a really long novel, then The Stand: Expanded Edition: For the First Time Complete and Uncut (Signet)

would be the one to tackle!