Review: Being Nikki by Meg Cabot

Last night, I took my lovely book on a nice walk with me. I know I've mentioned that I've recently rediscovered the fine art (or should it be considered a sport?) of reading while I walk. (And I don't mean on a gym machine...I mean outside.) Anyway, minus a soccer ball mishap that had me chasing down a ball for a little girl, and a pesky double stroller that a mom decided needed to be parked in the middle of the walking trail, I had little to no trouble trotting right along with book in hand. I have to say, it really kept my attention too, so the time flew right on by! 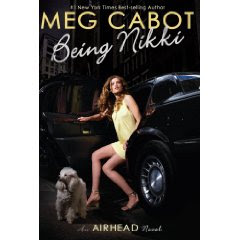 Synopsis: Picking up where Airhead left off, Em is still trying to sport the life of a super-teen-model, even though she never wanted to be super pretty or popular. Modeling in crazy photo shoots in the Caribbean, wearing clothes with designer labels, and dealing with brothers she didn't know she had...duh, because she's not who everyone thinks she is...only begin the drama that ensues in Book 2 of the Airhead series. Not only must Em keep the secret of how she became Nikki (to protect her family from being sued for millions they don't have), but must also deal with a mad-crush she has on her friend Christopher, who now thinks she's selfish, super-model Nikki.

Review: Does the synopsis sound a bit like a teen soap opera? Well, it is...kind of. I now get book one in the series, as it set up everything that then happens in book two. You get a sense of what is to come in Airhead, but it's not until Being Nikki that you really see just how complicated Em's life has become. I would think it would seem pretty fantastic to wake up and be super sexy, but I suppose it wouldn't be if at the cost of your very identity. In book two, I enjoyed the way her friendship with Christopher (he thinking she's Nikki) developed, and even though I kind of know where it's all headed, I liked the mystery and drama built into the story. There is way more drama surrounding Stark Enterprises, for whom she works, so you feel like there is always more we are going to learn. Also, we get the sense that Em is a good person, and it makes her actions (as Nikki) seem believable.

All in all, I liked book two the best so far. I'm glad that I read them back to back, as I'm sure that had I read Airhead alone, I would have thought, "Wait...what?" You really don't get to the heart of the drama until book two, so it definitely makes for a much more entertaining read overall. Once again, regardless of genre or subject, Meg Cabot manages to entertain me though, and I really do just love her writing voice.