Seriously.  I think I keep reading books about France, Paris, etc. because I'm dying to go back!  I thought I was going to get to go over to Paris next month, but that fell through, so I just keep reading books that can take me on a journey.  As for a literary journey, Days of Splendor is the second in the Marie Antoinette series, so I would recommend you check out my previous review of Becoming Marie Antoinette if you're interested in reading about Marie Antoinette or that time period in history. 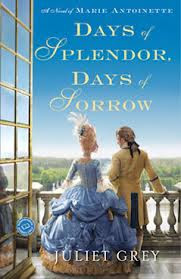 Synopsis:  From Goodreads, "Paris, 1774. At the tender age of eighteen, Marie Antoinette ascends to the French throne alongside her husband, Louis XVI. But behind the extravagance of the young queen’s elaborate silk gowns and dizzyingly high coiffures, she harbors deeper fears for her future and that of the Bourbon dynasty.

From the early growing pains of marriage to the joy of conceiving a child, from her passion for Swedish military attaché Axel von Fersen to the devastating Affair of the Diamond Necklace, Marie Antoinette tries to rise above the gossip and rivalries that encircle her. But as revolution blossoms in America, a much larger threat looms beyond the gilded gates of Versailles—one that could sweep away the French monarchy forever."

Review:  Picking up where the first book left off, we find Marie Antoinette learning about her role on the throne and how to deal with her lack of a child.  Even more troubling is her entire lack of intimacy with her husband, which would give her that child.  Repeatedly, Antoinette faced the ridicule of the court and the citizens of France.  Why couldn't she produce and heir?  Was she just there in Versailles to spend money and drive the people of France further into poverty?

I'm pretty intrigued by the story of Marie Antoinette and have been for a long time.  The first book really made me feel for this young girl, who was thrown into a world of responsibility, yet sheltered away from the world that swirled around her.  In this installment, her biggest worry is her lack of a child with Louis.  Yes, he has stress to deal with in his position, but he continually runs off hunting and then cannot be intimate with his own wife.   Since we view the story from Antoinette's viewpoint, it's difficult not to want her to just have a child and get some of the stress of the nation off of her shoulders.

Thankfully, as history tells us, she did eventually go on to have children with Louis.  There is some research that says or believes that Louis had a condition known as phimosis, which once circumcised, made him then able to reproduce and have children with Antoinette.  Whether this is true or not, historians still seem to debate.  However, this was part of the story and really added to the drama surrounding Antoinette's crazy life at court.

Beyond the story with Louis, I really liked hearing about Antoinette's time acting and spending time on the grounds of Versailles.  To a full-time working gal, the kind of luxuries she enjoyed sounded pretty heavenly, even though she often described them as tedious.

Laden with history, intrigue, and romance, Days of Splendor is a great historical read for those interested in France, Versailles, or Marie Antoinette.  The story does not end with this book, and because of that, I'm anxious about the one to follow.  We know from history what happened at Versailles, so I'm a bit nervous to read the next installment.  The writing, descriptions, and details are sometimes a bit slower in this second novel, but I still found the story captivating and interesting to consider.  Although I like to wonder and dream about parts of Marie Antoinette's life at Versailles, there are definitely many things I can see that I would never want to experience!