Review: Stones from the River by Ursula Hegi 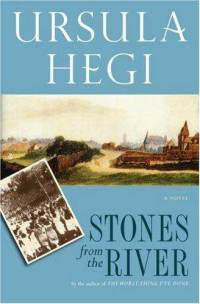 Synopsis:  Set in Burgdorf, Germany around the time of WWII, we are introduced to the "Zwerg" (dwarf) Trudi Montag.  Besides the obvious difficulties Trudi must face by being smaller in stature than those in her community, she must also grapple with the challenges of a country at war.  Through Trudi and the people of Burgdorf we get a memorable story of how one town survived as the Nazi regime created chaos and evil wherever they went.

Review:  Ursula Hegi's novel Stones from the River was unlike any WWII novel I have ever encountered.  Although we are exposed to some of the injustice Jews encountered during the Nazi regime, the story centers more on the everyday people of Burgdorf and how they responded to the economic hardships Germany faced as well as Hitler's changes to their culture and lifestyles.

In a pretty interesting sort of way Hegi managed to show a side of the WWII story that we might not have considered, in particular how the everyday citizen in Germany was affected by the evil surrounding them.  Often we think about what people had to know and why they didn't do more to defend the Jews.  Although the story doesn't focus on that, I got a better feel for why people didn't do more than they did.  The fear people felt and the harsh reality of living day to day made the crazy stories they heard about their Jewish neighbors seem like impossibilities.  We watch as the men in the town head off to war, either to never return home again or to never be the same.  Women who remained behind either suffered from providing for children alone, from despair and loneliness, or from the guilt they felt from moving on to new loves.  Also, the tension surrounding Trudi Montag's dwarfism lends the story a new twist; Trudi isn't a Jew, but she knows what it is to be different and sometimes an outsider.

Overall, I felt that the novel did an interesting job of telling a character story, most of all.  The characters felt real and present.  I did find the distance in the story strange at times.  For instance, Trudi tells of what they heard happened to their town's Jews, but not of her own thoughts or opinions.  We understand that she hated Hitler and wished him to be taken out of power, but she was as powerless as everyone else to ever express these opinions.  In short, the novel felt mostly like a retelling, but with an interesting perspective on what the average German did during the war and how they might have felt.  For that, I was glad to have had a book that allowed me to rethink Germany and the impact the war had on everyone there, and not just the Jews.