What is the true power in a person's stories?  I'm not talking about the ones we make up or read to children before bedtime.  I mean OUR stories; the stories of our life that build the unique individuals that we really are inside and out.  There are the things that have happened to us, the things we have been taught, and then the things we tell ourselves about both--which really shape our perception of the world and who we end up being.  It was in this layering of identity that we get Thrity Umrigar's, The Story Hour. 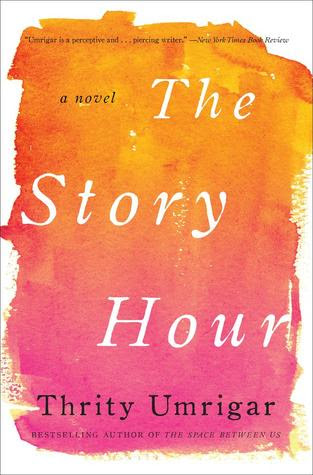 Synopsis:  Our two main characters, Maggie and Lakshmi, come into contact with one another after an attempted suicide by Lakshmi, the lonely arranged wife of an Indian man running a local Indian restaurant and store.  The marriage was one of distance, hurt, misunderstanding, and distance.  Lakshmi felt so alone and so unloved or even seen, that she attempted suicide, which landed her in a state facility.  There, she met Maggie, the psychologist who came to learn the reasons behind her attempted suicide, and in the process crosses the boundary between doctor and patient to care very much about Lakshmi's "stories" that have built her life.

Review:  The Story Hour is one of those novels that sneaks up on you, and before you know it, you care deeply about the characters involved and want to sit with them to hear more about their lives.  Complex and yet quiet in its complexity, our two main characters, Maggie and Lakshmi, create a friendship out of a shared understanding of what it means to feel alone, feel overlooked, and/or even feel unheard.  Maggie learns about Lakshmi's past in India, and what brought her to the marriage that has left her so lonely; a journey that somehow feels relatable, regardless of where you're at in life.  Maggie, who has a spectacular marriage and husband, also feels that something is off-balance in her own life, but examines it more quietly, through her visits with her patient, Lakshmi.

The thing I found most appealing about this novel is the way that the story binds and connects the characters and readers to one another.  That is a powerful metaphor and symbol, throughout the novel, that represents and speaks for that lifeblood that connects us all as human beings.  While the characters were subtle, and not without their flaws, we can relate to them.  These are qualities which make me take their stories to heart.

There were moments in the story where I worried about the direction it might head, and I worried we would be left hanging at the end, yet there is a satisfactory conclusion to the problems and concerns our characters find themselves in.  Lakshmi is a woman of courage and deep emotion.  Maggie is a woman filled with conflicting emotions and a lack of foresight.  Together, their lives--stories, help to heal wounds they both carry, and help them to understand things about themselves they would have ignored had they not been bound together.

Overall, I was captured by the language and emotion of the "story" told.  It made me think deeply and to feel deeply.  In short, I walked away with a greater appreciation for the lives we lead and a respect for the journeys each person must take.