It's that time of the summer, once again, for me to really start drafting up "To Do" lists for myself, and to start thinking about what needs to be accomplished before I head back to school in about three weeks.  No longer am I drawing up lists based on what I need to read (because those are the funnest lists of all), but instead I'm figuring out what needs to be done around my house and what I still need to lesson plan out before the madness really ensues!  About now, I wish I had a personal assistant, so I could keep reading!

As I've mentioned before, I'm going to be teaching a new YA Popular Fiction class this fall.  On the one hand, I'm super excited, and on the other hand, as I put together brand new materials, I'm wondering what I was thinking!  There is a lot of work that goes into creating new curriculum.  The fun part of the course is that I get to do a lot of reading in preparation.  I've been rereading some of the book I'll be teaching, such as the Harry Potter series, as well as The Hunger Games.  Along with this, I've been drafting up lists of books, as "suggestions" for other books that my students might like to read.  As part of that, I accepted an advanced copy of a new series of young adult books being put out by Harlequin's imprint Kimani Tru.  Like many readers, I thought they were only geared toward romance, so I was interested in learning more about their foray into YA literature.  As part of this new endeavor, I had a chance to read, Manifest, by Artist Arthur, which just came out yesterday. 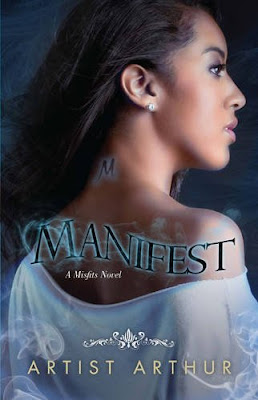 Synopsis:  From Goodreads, "When fifteen-year-old Krystal Bentley moves to Lincoln, Connecticut, her mom's hometown, she assumes her biggest drama will be adjusting to the burbs after living in New York City.
But Lincoln is nothing like Krystal imagined. The weirdness begins when Ricky Watson starts confiding in her. He's cute, funny, a good listener—and everything she'd ever want—except that he was killed nearly a year ago. Krystal's ghost-whispering talents soon lead other "freaks" to her door—Sasha, a rich girl who can literally disappear, and Jake, who moves objects with his mind. All three share a distinctive birthmark in the shape of an M and, fittingly, call themselves the Mystyx. They set out to learn what really happened to Ricky, only to realize that they aren't the only ones with mysterious powers. But if Krystal succeeds in finding out the truth about Ricky's death, will she lose him for good?"

Review:  Manifest is an interesting blend of the new and popular mystery and paranormal story that so many readers have come to crave.  In this particular story, the paranormal element comes in the form of a group of teens who find they have matching "tattoos" or marks in the shape of the letter "M."  Krystal's power seems to be the ability to speak to the dead, and although this might be cool in most cases, when you're a teen dealing with moving to a new school and the break up of your parent's marriage, it's all a bit much for her.  Although I'm not a teen, I have to admit that I would never want this particular power, as speaking to the dead is a bit creepy in my book, and hard to not get a little shiver when thinking about it!

The book starts off pretty slow, feeling more like journal entries chronicling Krystal's days at school, at home, and at the time she meets her first "dead" person.  By about the mid point in the book, the action picked up, and the mystery behind the death of the dead kid "Ricky" starts to unfold.  I appreciated that the clues dropped throughout the book actually matched with the way it turned out.  In some cases, readers might find this annoying, as they guess the ending; however, I am just the opposite.  I'm not a huge mystery fan for the fact that most writers "break the rules" (so to say) of the plot, and trip you up to shock you.  In the case of Manifest, we learn what happens right along with Krystal, and we realize who has committed the crimes as she does.  Honestly, I like figuring things out, so thanks to the author for creating a solid plot that followed through!

For young adults looking for a quick mystery, with a little bit of magic and romance mixed in, this is a great fit.  As it seems we don't have enough characters of color who take the lead role, who aren't merely talking about cultural angst, I also thought this was a great mainstream novel for all readers to enjoy.  The storytelling can feel a bit like journal entries at times, but has a cohesive story, and interesting teenage characters.

Thank you to Lisa at the Harlequin imprint Kimani Tru for the opportunity to review this novel!

*FTC Disclosure:  This review was based on a review copy provided by Harlequin Books.  No monies were exchanged in reference to this review.

Just as a quick question, does anyone else feel that mysteries should follow their own clues to lead to the end result, or is it just me?
Posted by Becky at 7/28/2010 06:18:00 PM