I can't believe the weekend is over! As always, the days flew by. Thankfully, I rested up A LOT, and feel much more prepared physically and emotionally to face these last weeks of school. The students get pretty buggy, and can sometimes turn from nice kids, into frustrated mean kids! I get why they are frustrated, and I try to roll with it, while still trying to get things accomplished. Talk about tricky at times!

Anyway, that's neither here nor there, right? Things are wrapping up quickly, and in the midst of that, I've been able to fit in some reading while walking or right before bed. About a week and a half ago, I finished reading The Last War, by Ana Menendez. It has received some mixed reviews on Amazon, so I was pretty curious about my own response. Usually I like books like this, and I can say that my instincts were right again. I actually really loved this novel. 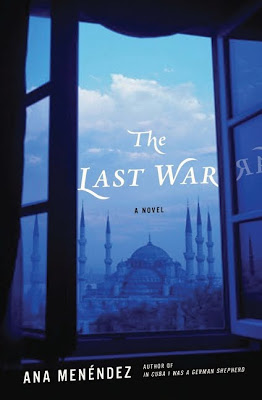 Synopsis: Leading into the initial invasion of Iraq, Flash and her husband Brando are war photographers and journalists. Having spent time in places like India and Afghanistan, the couple were not new to conflict. As the book begins, Flash has been left behind in Istanbul, where she is living and waiting for her husband to call her to join him in the war zone. While waiting, Flash explored the city, walking the streets of Istanbul on her own. Over time, the city became another pivotal character in the novel, as the backdrop for her discoveries about herself, her marriage, and her life alone in the city. During this time Flash only heard from Brando from time to time on a satellite phone, wherein he would share traumatizing moments he witnessed. Flash soon became more distanced from her husband, and ultimately, after receiving a terrifying letter from an anonymous woman who revealed her affair with Brando, shattered whatever sense of self Flash had. How does one discuss, fix, or heal a broken relationship when each person was settled somewhere else? What, ultimately, should Flash do in response? Should she believe the accusation? Should she leave Brando and return to the United States, or should she continue on in Istanbul with her own career? Could the letter be a mistake?

Review: I was thoroughly, and utterly enthralled with The Last War from the first page or two, until the end. It didn't take long for me to realize that this was NOT a story about the Iraq war, about a war correspondent, nor a story to reveal the culture of the Middle East; rather, this novel was a human drama, played out in far-flung locations that added an extra depth to the novel.

Having spent time in Istanbul, I readily picked up on the locations and streets mentioned by Flash (as the author had spent time there as well). I could see the tram she rode, as well as the views across the Bosphorus. In a city as charming as Istanbul, there really isn't a way for the book to continue without the city being another main character in the novel, and it definitely was for Flash. The days she spent wandering, questioning her life and marriage, and facing her fears about both, were played out in a city of as much grace, charm, and wonder as you could situate a main character within.

In the end, the drama of the novel was about Flash and her husband Brando. Over time, we learn that her marriage had troubles, and we learn more about the time the two spent in Afghanistan, which left Flash somewhat traumatized. Stories of the past come in to haunt her, just as the war is in Iraq is haunting her husband Brando. The interweaving of trauma and love made for a gripping novel, and one that I absolutely couldn't wait to pick up reading each day. I really and genuinely think that Ana Menendez's novel, The Last War is a brilliant juxtaposition of the complexity of human lives to that of international conflict. While not the "war" story that some readers might have been looking for, I found the implied backdrop of the Iraq war and conflict in the Middle East to be the perfect foil for Flash's own personal issues. The novel was simply brilliant in my mind, and one that has left me thinking about and considering for days after I finished it. What more can I say than an absolutely brilliant read in my opinion.

*FTC Disclosure: This review based off of a library copy of the novel.