With a little extra time to read now that the year is winding down, and the headaches eased up, I have been a reading fiend! As part of the 10,000 step challenge that just finished up at work, I've been taking about an hour walk every day, and taking a book along for the ride. I can report back that after four weeks, I lost four pounds. I suppose that's right in line with the "healthy" range you should be losing at, right? That made me happy to see. Anyway, as part of that walking plan, I would take a good book along with me. Yesterday, I took Judy Blume's famously challenged novel, Forever along for the walk. This last year I read Blume's other challenged book Are You There God? It's Me Margaret (previous review at that link) and found it to be a very honest book about what teens go through during puberty. Likewise, I think that Blume's Forever takes an honest look at teen sexuality, and doesn't shy away from speaking the way a teen girl very honestly might in this situation.

I know I might get myself in a little trouble with some of my extra conservative readers with this review, but here we go. Let's consider teen sex... 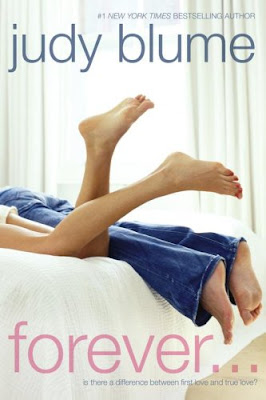 Synopsis: Katherine first met Michael on New Year's Eve, when Michael leaned down to kiss another girl at the stroke of midnight. She was intrigued by this good looking senior from a neighboring high school, and was excited to learn he had picked up her phone number from a friend. The two soon started dating, and with the excitement of young love and dating, came progressive steps of intimacy. Katherine revealed to Michael she was a virgin, and not emotionally ready to have sex, which he respected (even if he pushed the boundaries a little to see if she was really serious). Over time, and with increased steps into their exploration, Katherine and Michael had sex. Although the adults in their lives seemed in the periphery, they were there, looking in with concern, and questioning the two on their relationship. Frank discussions about teen sex and pregnancy made the two sincere in their use of protection, both from STDs and pregnancy, but did little to curb their desire to be together. With graduation looming, and two colleges far from one another, Katherine and Michael had to consider if their love could keep them together, and how they might bridge that gap to keep their relationship growing. Was their love forever, and could they stay together?

Review: I realize that I'm an adult reading this short novel, and with that comes a more adult perspective on sexuality that is based on a more mature perspective (and a developed brain helps in this case). Here's the thing. I think that we, meaning adults, tend to shy away from sex in such a way that it makes teens 1) curious, and 2) ashamed. How do we expect them to come to understand sex if all we tell them is to wait, not do it, or that it's bad to do before marriage? Now, I'm not saying we should encourage "erotic play" as put forth in Aldous Huxley's Brave New World (you can see my review of that novel at the link), but will say that there has to be a better way of helping teens to understand that what they are feeling is natural and normal, and that with some understanding of its influence, can be used when appropriate to the person. Since the novel is told from Katherine's perspective, and I have to say she was a pretty together teen, we get only a slight sense of the adults present in the story. Their presence seemed much more light handed, because I think that Katherine's teen voice filtered them out in her focused drive to find any way possible to be with Michael. This sounds pretty true to life to me. The "I'll die if I can't be with him" phrase feels all too familiar in teen fiction, and rings true in Forever.

Having been raised very much with the "sex is bad" motto ringing in my head as a teen, I have to say that this novel would have shocked me. I really don't think I could have read it and got anything out of it, but I do think that many more teens are rushing forward to understand more about sex, and stumbling along the way. I can't say that I would put this novel in the hands of every teen I see, but I will say that it's message about young love feels honest and real. In fact, if two teens were having sex, you would hope their experience was anywhere near as respectful as the one between Katherine and Michael. Should this book be banned? I don't really believe in banning books, but I do believe that certain books (such as Madonna's sex book), shouldn't be in a public school setting. Should this one? Yes. I don't think that Forever is necessarily glamorizing sex, trying to be titillating, or even gratuitous. Come on, I know young teen girls reaching for romance novels for that! In the case of Judy Blume's novel, leave it on the shelves, and those teens seeking out a story that reflects their own curiosity about the "what if" about their own sex lives will find it. Will it offend some teens and cause them to be even more curious? Of course. Maybe those are the teens that need someone to allow them to feel safe enough to bring up what they're curious about in the first place? In the end, sex is still an extremely taboo subject in most homes and schools. Other than glamorizing it in the media, it has little to no place in our educational process for teens (and I don't mean at school...I mean in the home). In the end, most teens won't come ask, because it's just too "weird." If that's the case, although blatantly forward in the mechanics of a young relationship, I think Blume was courageous in her novel of young love...taken to the next level.

*FTC Disclosure: Book review based off of a library copy of the novel. Also, as an Amazon.com associate, a very small proceed comes from purchases of the novel made from this review. 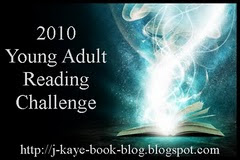