Early last year I read and reviewed Nancy Butler's graphic version of Pride and Prejudice.  The next release for Sense and Sensibility was advertised and I was eager to get my hands on it.  As I've mentioned before, graphic novels are a great easy read that helps you escape into a good story.  What's better than a Jane Austen escape?  That makes these graphic versions kind of fun. 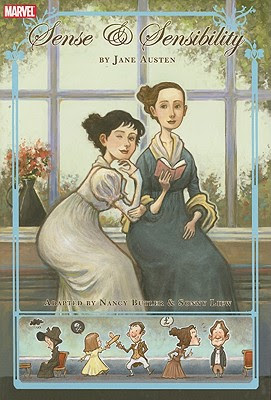 I'm not sure that Sense and Sensibility needs much of a synopsis, with its themes of using good sense in judging people's character and in one's own character.  The charm of sisterly bonds are present in this great story, with Elinor as the eldest and seemingly most sensible, Maryanne as her younger and more whimsy-driven sister, and the youngest adventuresome sister Margaret.  Having lost their fortune to a step brother who was given their father's property and cash at his death, the Dashwoods move into a cheaper cottage and lifestyle, but also into a romantic new chapter of their lives.

As with any good Austen story, the romance is really one of the character features.  Although we don't really lose the basic story, I thought it was interesting that it feels a little washed out in the graphic novel sense.  I think it might be the descriptions I missed here, even though the dialogue pretty much stayed in tact.  Not much is lost in the story, but is obviously centered around conversations and thoughts.

The pictures are soft and pastel, with pretty rounded edges and crisp outlining.  There is a comic element to this that you can't miss, but I think that the brightness and seemingly soft quality to the frames gives it a soothing, happy tone that propels you through the familiar tale.  Overall, I genuinely enjoyed this graphic version.  I'm a bit more partial to the Pride and Prejudice version, if only because of the stronger focus on a few characters instead of the many we get in this tale.  The story is still all there though and a treat to read (and view) in this graphic form.  I hope Nancy Butler pens a few more great classics!