Review: Lola and the Boy Next Door by Stephanie Perkins

Thank you to all those who had a few kind words for my slipping sanity last night.  This last grading period had me ready to run screaming for the hills (so to say). Thankfully, the grading is in, and I'm feeling like a new woman!

So, I know you're saying, "Wait, didn't she go out of the country not too long ago?  Isn't that why she's stressed out?"  Why, yes.  That's true.  In fact, I packed essays with me and did my online job while I was away, so I can't say that I got off the hook completely.  That's all behind me now, and I'm thankful that on one of my flights home I had the chance to read Lola and the Boy Next Door, by Stephanie Perkins.  I LOVED Anna and the French Kiss, so I was pretty eager to read Stephanie's newest book.  I was not disappointed. 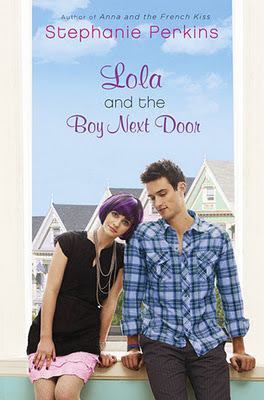 Synopsis:  Lola is a girl all in her own style, personality, and right.  Raised by two loving gay fathers in San Francisco, Lola was off to her senior year with a hot Rock n' Roll boyfriend and the quirkiest, yet most unique style around.  Although mature beyond many of her school friends, Lola was brought back to reality when her first love/crush/best boy friend moved back into the house next door.  With him came a flood of memories, one being the time she felt most rejected by him.  Not only did she feel rejected, but he had also stomped on whatever romantic feelings she had blossoming within her at the time.  Thankfully, this time around she was bolstered by her new relationship with the hot, older rocker.  Besides, the boy next door was just that, a too sweet boy from next door that never worked out.  But, is that ever really the case?

Review:  First off, let it be known that I love the reality that somehow makes its way into these teen novels by Stephanie Perkins.  No matter how far from what I know for the teens around me, her characters feel real, vulnerable, and engaging.  In short, these teens are people you wish you were friends with and had hung out with when you were in high school.  In that way, they aren't that unrealistic, but they lend their hearts to you so you can understand their reactions, hopes, and desires.  I love that about these characters.

Not really taking off where the wildly popular Anna and the French Kiss left off, but still including our much loved Etienne and Anna, we have what feels like an extension piece that adds another story to the pot.  In this case, we have the fashionista, Lola, who first steals our heart with her own back story behind how she came to be adopted by her two dads.  It doesn't take long though to also love that slightly awkward boy next door, Cricket, who wears his heart on his sleeve in so many ways.  We want to hang onto Max, but what is it about rockers always putting their "craft" first, thus leaving any chance for real connections to a day in the future?

In short, I loved this second installment by Perkins.  She has a wonderful knack of creating characters that you want to walk around with for awhile, and hate to set aside when the book is finished.  In all of their individual quirks and weaknesses, we love them all the more.  And in this case, Lola and the Boy Next Door has enough romantic tension to keep anyone flipping pages until the book is finished.  Where some romantic teen novels have romance, Perkins creates crazy-real tension; tension that anyone who has ever loved someone but not been handed them on a romantic platter will readily understand.  The misunderstandings and sappy sentimentalities are so understandable that we all fall in love with Lola and want to see her truly and undeniably happy.

If you haven't read a Stephanie Perkins novel, you really must.  The judge is still out on which book I liked better, but I think Anna won out, but only because of my own whole recent Paris trip.  Honestly, these books are so strongly character driven that you will instantly see parts of yourself in them.  In some way, you'll see yourself resolving teenage relationships that probably took you way too many years in your own real life.  In short, Lola and the Boy Next Door is a great read that will easily capture the love of many readers who either see themselves in these characters, or wish they had been them at a much earlier age.