The Great Gatsby Read Along: Chapters 5 and 6 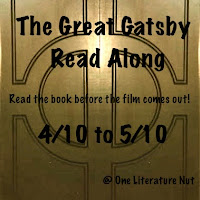 Not a lot of reading for this week, but some pretty serious development happened.  Rather than a chapter by chapter run down, I wanted to maybe focus in on the multiple perspectives at play in the story.  We have Gatsby's perspective, Daisy's perspective (of sorts), and Gatsby and Daisy as a couple perspective--well, and we always have Nick's perspective as our narrator.  Let me explain what I mean here.

Gatsby's Perspective:  Gatsby really reveals himself to be this insecure little boy behind the big money bravado.  It seems that no amount of power or money can hide him from his insecurities about Daisy.  We get that they have a past, but what in the world happened between these two to cause him to be so completely insecure?  That is the question that these chapters seem to be highlighting with greater and greater emphasis. 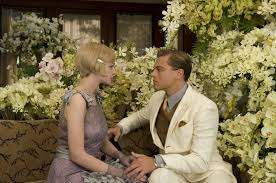 Gatsby's eagerness in chapter 5 to learn whether Nick has talked to Jordan Baker about Daisy, is palpable.  Gatsby won't come out and ask, "He waited, looking at me with suppressed eagerness" (82).  It is the great unspoken plea, to which Nick reassures him that he will set it all up.  And yet, Gatsby highlights through his protests, just how much he does want Nick to invite Daisy in his line, "'Oh, that's all right,' he said carelessly, 'I don't want to put you to any trouble'" (82).  This feels like it needs a Gertrude line from Hamlet ("The lady doth protest too much") to explain it.  In what Gatsby dances around in these chapters, he paints a more delicate and insecure portrait of himself than any narrating of his woes to the audience.

Gatsby has SO many moments of complete emotion-filled vulnerability, that I could fill paragraphs with his behavior and words.  He is antsy, sleepless, and "bored" one moment, only to frantically second guess himself and berate himself for what he believes Daisy feels (or doesn't feel).  On one hand he plays it cool, while on the other he reveals just the opposite (Hello!  Showing her clippings about her life?).  Jay Gatsby is on a mission, and that mission is Project Get-Daisy-to-Leave-Tom-and-Marry-Me.  Or, as he remarks at the end of chapter 6, to repeat the past. 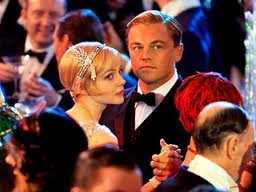 Daisy's Perspective:  Does anyone really know what she is thinking?  I think it's easy to jump to a hatred of Daisy, but I keep coming back to all we've learned about her.  A seemingly unhappy (at best) marriage to Tom (loveless at worst), an acceptance of her fate with Tom out of a need for security (financial AND social?), and a recognition of her dependence on men as a woman (thinking back on her "little fool" comment from earlier), all leave me believing that she is reacting from a place of hurt and fear.  Maybe it might be easiest for her to ditch Tom to return to Jay?  It seems that might be what she has in mind from her behavior around Gatsby.  And yet, she hasn't made a move to remove Tom from her life.  Would she dare?

Gatsby and Daisy Perspective:  There are these moments in the story that struck me.  When they were together, Daisy shed tears over their past,  Gatsby revealed he'd followed her life, Daisy acted much calmer, and Gatsby could back off and be a bit more subtle in his pursuit (the music wafting from the doorway after the party, "...in the very casualness of Gatsby's party there were romantic possibilities absent from her world.  What was it up there in the song that seemed to be calling her back inside?").

In Summary:  I love the multiple layers to these characters.  There is a lot of acting going on at a surface level--which we all do, while the real vulnerability hovers just under the surface to pop up and reveal itself.  As Nick says, Gatsby has an "appalling sentimentality," that grabs at all of us.

Line I Snickered At:  After Gatsby and Daisy reconnect at Nick's house, Nick excuses himself so they can talk in private.  On his way back in, he states, "I went in--after making every possible noise in the kitchen, short of pushing over the stove--but I don't believe they heard a sound" (89).  Yea, I can't help but picture Nick bumbling his way back into the house.  What did he think they were doing, anyway...  Too funny.

Okay.  I've rambled on way too much as it is!  There is so much I could go back to say in these chapters, but I'm looking forward to now finishing it up so that we can pull it all together.

Here are some of my questions for this week:
Well, thank you again for joining me!  This has been fun to revisit.

Please share if you would like!  Whether you've drafted up a blog post with your thoughts (which I hope you'll link), or you share some of your thoughts in the comments, I hope you jump in.

Email ThisBlogThis!Share to TwitterShare to FacebookShare to Pinterest
Labels: classics, Read Along, reading, The Great Gatsby Read Along