I can't believe how quickly time is flying. Here we are, and we're well into February! Somehow I found it surprising when I walked into my local library, and there were "Valentine" and love themed books set out on display. It took me a second to realize that we really are close to Valentine's Day again. Amazing! Having said that, I had read several reviews on Michael Thomas Ford's novel Jane Bites Back, and then saw it on display at the library. To say I was somewhat horrified at a vampire twist on one of my favorite authors, is putting it mildly--I was also pretty intrigued and picked it up. Yes, I then couldn't put it down! 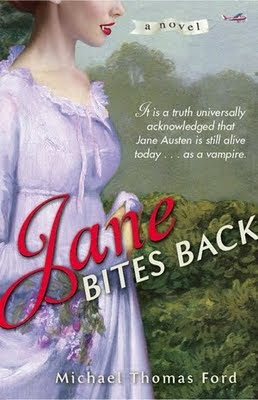 Review: Imagine that Jane Austen didn't die, and in fact, was turned into a vampire and walked among us. In the case of Jane Bites Back, famous poet Lord Byron turned iconic author Jane Austen into a vampire, as he already was. Set in our modern day, Jane Austen, now Jane Fairfax, worked as an independent bookstore owner. Although Jane had found some peace in her life, she was still definitely a vampire, with needs for blood, and a need to stay incognito to those around her. As a famous author, Jane watched as authors came along, publishing and capitalizing on parts or elements of her stories, driven crazy by some of the most bizarre. The biggest reason for her annoyance came not from the crazy number of books riding on her coattails, but on the fact that as a writer, she couldn't get her current novel published! Jane desperately wants to be published, wants to be understood by her good friends, and wants to be free of her vampire turner, Byron. In short, Jane wants to be happy to live her life the best she could.

Synopsis: I will admit that I wanted to really not like this novel. Yes, I love Austen sequels and remakes, but have a couple of "paranormal" type of Austen novels that I've avoided. Why did I try this one? Well, I will admit to being enough of an English major snob that once I noticed the literary name dropping going on (i.e. Lord Byron, Charlotte Bronte, etc.), I had to peek into its pages. All I had to do was read the first chapter to really be hooked. Ford's writing style is playful and commanding at the same time. He pushes us straight into the idea behind what it might be like if Jane Austen were a vampire, and what kind of life she might lead. Honestly, it was interesting, and kept me reading. Modern, vampire Jane is witty, and more experienced than the Jane Austen I pictured from her own era. As Jane struggles to get published, and to keep her vampire anonymity, I kept wanting her to find someone safe to confide in, or someone who would allow her to feel a peace in her life. To this, Ford introduces a shop worker and a male friend into the story who both pepper the story with their calm, realistic sort of friendships to help Jane deal with her crazy life.

In short, I thought this book was great fun to read. The literary name dropping that went on, the inside peek into publishing, and the intrigue of considering "what if" Jane Austen was a vampire were too fun. Going in I was a skeptic, but after one chapter, I didn't go back out again...Ford's novel sank its literary fangs into me with a fun, "vampy" sort of read! For more information see: Jane Bites Back