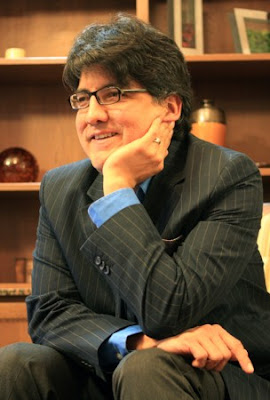 This is one of those posts that I've stewed about for over a month, mulling over the details and information I wanted to share. You see, last month I had the wonderful opportunity to go hear Sherman Alexie, famed author, speak at King's English Bookstore in Salt Lake City. Alexie made a comment/joke about graduate students that approach him with reverential awe, and even though my grad schools days are a handful of years behind me now, I will admit to a certain reverential excitement to my attendance that night. Even I laugh at myself, but I can't begin to say how excited I was to be able to attend his reading and signing.

In graduate school, I actually focused my research on Native American & ethnic literatures (more specifically, the teaching of such texts). Through my time studying these texts, my major professor at the time gave me the wonderful opportunity to go with him into his undergraduate, ethinic literature course and teach

Sherman Alexie's The Lone Ranger and Tonto Fist Fight in Heaven. In preparation, I poured over his work, reading his essays and poems, and marking the discussion points from the novel that I wanted the students to grasp. It was in this process, that I stumbled across his essay, "Superman and Me," which I still frequently take into the classroom so that I can discuss sentence construction and language. Was I a huge fan going into his visit here? Um...considering how many hours I spent studying, writing, and teaching his texts, I'd say that's a big YES!

Alexie was born in 1966, a Spokane/Coeur d'Alene Indian, and grew up on the Spokane Indian Reservation. He was born with water on the brain, and had to have surgery for it at the age of six months. In his appearances, and in books such as The Absolutely True Diary of a Part-time Indian (which I read and reviewed this summer), discuss or include his experiences with hydrocephalus. Alexie attended high school off of the reservation, and later went on to Gonzaga University, later transferring to Washington State University.

His first two volumes of poetry, The Business of Fancydancing and I Would Steal Horses, were both published, and are heralded by many authors, teachers, and readers. He has since worked on film, Smoke Signals, and published a lengthy list of novels that have received much notice and acclaim. Some of the novels he has written include: Reservation Blues, Indian Killer, and Flight, not to mention his books of short stories and poetry, The Toughest Indian in the World, Ten Little Indians, and War Dances, to name a few.

Much of Alexie's work is filled with an irony and humor that can't be passed up without asking someone nearby to, "listen to what I just read." I've literally been known to call up friends and family while I'm in the middle of reading one of his poems or narratives, to share something I thought was poignant or downright hilarious. More often than not, it was the amazing humor and depth of understanding in explaining cultural difference that has me always coming back for more. Literally, I can't get enough of his work.

At the book signing, I will say that his humor was colorful, and had me blushing a couple of times and looking around to see other people's response to his insights and jokes. He is a great speaker, and doesn't shy away from politics, culture, or gender. In short, I found him captivating in his honesty, and I will admit to laughing A LOT during his reading and introduction. (Below is the one picture I was able to salvage from the book signing. I had the person behind me in line snap the picture with my iPhone, and as happens, the camera moved while snapping the photo, so we're all blurry and crazy looking. Fun, but not good enough to post!) 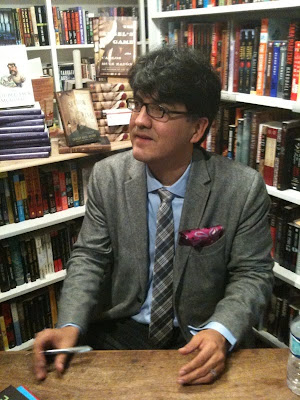 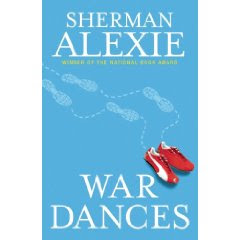 Soon to follow, I will be posting my review of his most recent collection of short stories and poems in War Dances. I even have an extra copy and will be hosting a giveaway, so stay tuned!
Posted by Becky at 11/15/2009 09:23:00 PM