Review: Most Talkative by Andy Cohen 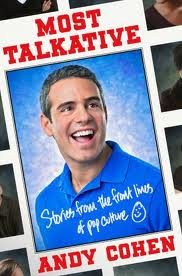 Synopsis:  If you watch Bravo Television at all, you have to know Andy Cohen.  As the man behind the reality shows on Bravo and the host of Watch What Happens Live, Andy is that hilarious, reality super fan that we all somehow relate to.  Before becoming the man behind the Real Housewives franchise, Andy Cohen was a young pop culture fan from St. Louis, Missouri, who began to realize that he was something different from those around him.  Eventually, Andy came to terms with what made him different, which was that he was gay, and gained the strength to let it be known.

After college, he came out to his friends and family, and proceeded to follow his dreams in television.  This led to his current, lucrative and exciting career with Bravo.  The stories he goes on to tell in this book are both poignantly personal and pop-culture, both memoir and tell-all.

Review:  I have been a Bravo fan for a very long time.  In fact, I started watching the Real Housewive's franchise from day one of the Orange County ladies.  Andy Cohen was kind of a known extra cast member of sorts, to those of us who have followed these shows.  I think everyone who knows him, loves him!  Honestly, Andy Cohen has a great sense of humor, and a way of saying what he thinks about these women's crazy antics without really saying it and showing his bias.  In short, most fans of the network love Andy.

The thing I loved about his book was the candid way he talked about his own life and his own experience growing up and coming out as a gay man.  I did find it interesting that Andy seems to write of his coming out as part of his life, but not the defining feature of his life.  In coming out, his family seemed to embrace him and move on with life, so the person he speaks of with greatest fear was his good friend and college roommate.  I was so moved by his expression of fear and concern over telling his friend and really could start to appreciate how that must have felt for him.  In the end, his roommate embraced his coming out and the two are still good friends today.

There seems to be an integral connection between Andy's pop-culture obsession and his current job, all fueled by healthy doses of all that is uniquely Andy.  His memoir talks about his early days on national, morning television--including stories about Oprah Winfrey, various CBS news anchors, and other celebrities that made this a real page turner.  Just the stories behind the Housewives franchise (which really is a pretty small portion of the book), make it a must read for fans.

I really enjoyed Andy's story.  There is such a nice mix of happy and serious, to really echo what we see with the real Andy Cohen on his show.  His anecdotes and memories are funny, fast-paced, and engaging.  Now I will just hope that he writes another book, with more great "behind the scenes" stories for us in a few years down the road!