Review: I've Got Your Number by Sophie Kinsella

Every night this week I've reached for my laptop to post a review, only to fall dazzlingly short of the goal.  Work has knocked me flat every day, which I think is always normal near the beginning of a new year.  Even though we're three weeks into our new year, I'm still getting used to the voice strain, achy feet, and psychological fatigue.  Does it mean I'm getting even older if it's taking longer and longer for me get back to "fighting" shape?!?

Thank goodness reading takes very little energy, because it has been my good friend after a long day at work.  Speaking of which, I have to share one of my favorite reads from this summer, I've Got Your Number by Sophie Kinsella.  Talk about a fun read! 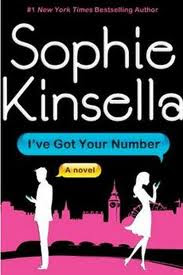 Synopsis:  From Goodreads, "Poppy Wyatt has never felt luckier. She is about to marry her ideal man, Magnus Tavish, but in one afternoon her “happily ever after” begins to fall apart. Not only has she lost her engagement ring in a hotel fire drill but in the panic that follows, her phone is stolen. As she paces shakily around the lobby, she spots an abandoned phone in a trash can. Finders keepers! Now she can leave a number for the hotel to contact her when they find her ring. Perfect!

Well, perfect except that the phone’s owner, businessman Sam Roxton, doesn’t agree. He wants his phone back and doesn’t appreciate Poppy reading his messages and wading into his personal life.

What ensues is a hilarious and unpredictable turn of events as Poppy and Sam increasingly upend each other’s lives through emails and text messages. As Poppy juggles wedding preparations, mysterious phone calls, and hiding her left hand from Magnus and his parents . . . she soon realizes that she is in for the biggest surprise of her life."

Review:  Let me say it straight.  This was one fun book!  I smiled and laughed a lot while reading Kinsella's newest novel.  Poppy was every woman and I can't imagine a person not finding something to relate to in her character.  She lost her engagement ring in a "let me try it on" shuffle between friends.  Her cell phone got snatched by a rotten thief.  So then, her only option was to take that cell phone abandoned in the trash can.  Right?  Here's the thing, would you really answer it--honestly--when someone called?  I would be too nervous to take those calls, but Poppy pulled it off in a pretty hilarious way.

I loved Poppy, but once she met up with the owner of the abandoned phone, Sam Roxton, the story took an entirely different turn.  Sam is your stereotypical serious, driven, and stern businessman.  Somehow though, Poppy's witty personality became a great sparring partner as she convinced him to let her hold onto that phone and even forward his important calls and emails to him.  Then what do you do?  Well, spy on his life--of course!

I really enjoyed I've Got Your Number for all of its laughable moments.  Honestly, I haven't seen an author capture flirting as authentically as Kinsella did in this novel.  There is that funny moment where flirting is just what you naturally do, to what you really want to do, to what you can no longer do because you like someone too much.  Somehow, she captures it all.  It's been awhile since I read a chick lit that had me smiling and laughing aloud this much.  If you've read Kinsella's novels before, I would definitely compare this to some of her other stand alone novels like The Undomestic Goddess.  If you liked those, then you have to give this a shot!

*FTC Disclosure:  This review was based on a library copy of the novel.