What a nice week!  Although my Goodreads Challenge tells me I'm 2 books behind, I've been reading a lot this week and will have several books finished in no time.  It has been a great, relaxing week with my family.  Besides one absolutely KILLER cold day yesterday, the weather has been beyond temperate.  It's delightful.

Thankfully, all this R&R has made me so much more eager to get online and get back to blogging!  It's time to catch up on reviews, so I have to share this amazing graphic novel I read last month. 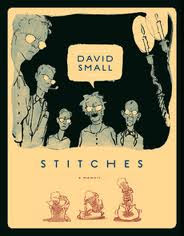 Synopsis:  In this graphic novel, we get the startling and touching memoir of David Small.  As a child, his well-meaning parents raised him with a starkness that left him unhappy and even angry.  Not understanding his parents' issues until he was much older, the story merely enters into the trauma and tragedy that young David experienced.

After developing cancer as a young boy, that resulted in him losing one of his vocal chords, he spent a lot of time growing up with an imposed silence and a scar that left him feeling tormented.  How do you talk back to clueless and sometimes cruel parents and family members when you can't speak?

Review:  I've had Stitches on my shelf for some time, possibly intimidated by its ghoulish looking cover.  Thankfully I pulled it out and was completely absorbed in the story from the beginning.  Told from the perspective of the author as a little boy, his memories are clouded with the surreal and the stark.  The memories that stood out to him the most were those that shaped him and transformed his future.  His story was and is mesmerizing and one that I couldn't put down.

The writing and pictures in this graphic novel are superb.  They set this gray-about-the-edges tone to the piece that makes you feel an incredible amount of angst for this child.  I wanted nothing more than for him to triumph, which is hinted at by the fact that he has published this genius piece and been the finalist in multiple awards, including the 2009 National Book Award.

His story is haunting, human, and humble.  In some strange way, those things that tormented David are the grand-size version of things that haunt all of us as adults.  Although I haven't experienced a fraction of what he has, his story touched me and reminded me of some of the isolation, fear, and anger that always go along with growing up--even if it's only minuscule.  His ability to create a life out of what appears to be some of the greatest horror, is inspiring.

Stitches is genius.  For graphic novels, this is definitely on the serious side, with dark tones and topics; however, it was one of the best stories I've read in awhile.