Last week I posted a review on Megan Mulry's third in the Unruly Royal series, In Love Again.  Book three is a great "second chance" love story and adds a nice twist to the previous stories, with this book being told from the perspective of the royal (although, I can't say that seems to throw things off much in this case).

Here's a quick blurb about In Love Again:

The Marchioness of Wick is about to get a second chance at life...whether she wants it or not. After twenty years in a loveless marriage to a duplicitous British aristocrat, Claire Heyworth Barnes finds herself broke and alone. Encouraged by her dynamic American sisters-in-law, the shy royal decides to start over in New York City. After landing a job with an interior designer, Claire reconnects with the first-and only-man she ever loved, Dr. Ben Hayek. Can they build a new love from an old flame? Or will a bitter past and a complicated future stand in their way?


Today, I'm excited to welcome Megan Mulry to my blog for a chat about her newest book!


When you started writing these books, did you anticipate writing about a different person in the family, their royal, and picture their individual stories?

Yes, when I first sat down to write Bronte (A ROYAL PAIN), I knew I wanted to write a book about each member of the British Heyworth Family and the American they fall in love with. I don't really plot, but focus much more on character development (What type of person is this? How will they react in this type of stressful situation?) and then once I've got their personalities sorted I throw them together and let the story unfold. (Then lots of revisions and edits!) So I guess I picture them as people more than I picture their stories, if that makes sense.

Claire was an interesting mix of aloofness and vulnerability.  I really liked that Claire is a little older and with a little more life experience than some of the our younger characters.  Do you think that older characters, like Claire, deal with different emotional issues than younger characters (in terms of romance)? 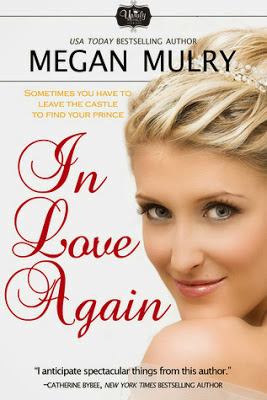 Yes, but I think it's more than that. This book is different because Claire is different: whether I had told the story as an NA (New Adult) when she was 17 or as it is now, with her 38, it would have had the same tone. I thought about this question a lot and it gave me a sort of epiphany. I realize that each one of my books--even though they take place in the same fictional world and are told in third-person by the same narrator--ends up reflecting and projecting the characteristics and personality of the heroine. A ROYAL PAIN is neurotic and ambitious and eager, just like Bronte is. IF THE SHOE FITS is sparkly and young and bold, like Sarah James. IN LOVE AGAIN is softer--meditative and tender--just like Claire. I think my books are so character driven that it would be impossible for me to tease out the heroine's perspective from the actual telling of the story. (R IS FOR REBEL, my February release about Abigail Heyworth, further proves this point. She is going through some major soul-searching and her story totally reflects that.)

Benjamin is a dream.  I really loved that he remembered her all those years from when they first met.  He also seemed so incredibly vulnerable and scared of her, which was such a crazy combination.  How did you develop Benjamin?  Any fun tidbits about him?

*sigh* I loved him too. Writing an older hero presented some different challenges. I wanted him to be established, to have built a good life, otherwise I don't think he would appeal to the heroine. But he also had to have lost sight of his dreams along the way (wanting children and a strong family life), in order to give him so much vulnerability. I have a few friends who really wanted children and for one reason or another never had them. I think this is a really universal feeling of regret and it just sort of came into my mind (and I think my fabulous editor Lisa Dunick may have pointed it out). Ben needed more motivation than just being divorced and lonely. (For the record, I also have a few friends who are childless by choice and perfectly happy about it…always feel like they deserve a mention too!) In terms of fun tidbits, about a year and a half ago, I had emergency oral surgery and I went to a new dentist and he was such a lifesaver. (And handsome!) I decided then and there to make my next hero a dentist. Which was also a fun challenge because for some reason lots of people think, "Dentist? How are you going to make a dentist sexy?" (Uh…in the usual way, lol.)

Yes, I think you completely succeeded in making Ben, the dentist, sexy!  :)

It was nice to see Claire connect with her daughter, and Benjamin be a role in her life as well.  Do you think that the daughter will appear in later novels down the road now that she is more present in her mother's life?

Lydia, Oh Lydia! I am still very much on the fence about writing Lydia's story. I would love to write an interracial romance with her and Alistair; I think we need WAY more representations of interracial relationships in fiction and in all media for that matter. The thing that is holding me back is my fear that Lydia's story will be very bitter--with her history of drug abuse and probably other forms of self-abuse. Yes, she's on the mend, but I suspect she's going to be careless and mean to Alistair and I just don't know if I have the heart to go through that. He can handle her, of course. And recovering drug addicts totally deserve their HEA, so… Ugh! See? Can you hear me developing their characters as I write this? This is always how it happens! Basically, I'm afraid Lydia's book could cross a line into depicting the horrors of drug abuse that I'm not sure I am ready to cross just yet.

I want to thank Megan Mulry so much for stopping by today and for chatting with me about her newest release!

Now for a little giveaway:

Tell me about your first love!  Do you have a first love, and do you know what happened to them?  Would you ever want to meet back up with them?  Respond to this fun little question by Monday, December 9th by midnight (MST) with your response and email address for the chance to win one kindle ebook copy of In Love Again, U.S. only.
Posted by Becky at 12/04/2013 07:26:00 PM